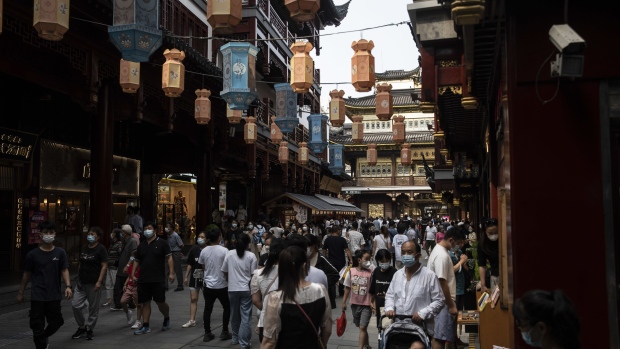 (Bloomberg) -- Chinese holidaymakers cut back sharply on travel and spending during the National Day break this week as strict Covid rules discouraged movement, while signs of a consumer slowdown across Asia mount.

Tourism revenue declined 26% to 287 billion yuan ($40.3 billion) over the week-long holiday from a year ago. Compared with pre-pandemic levels in 2019, revenue was down nearly 56%, and even worse than last year’s 40% decrease from 2019 levels, according to figures from the official social media account of the Ministry of Culture and Tourism. Roughly 422 million trips were taken, down 18% from last year and 39% from 2019 levels.

The number of trips taken via railways, roads, water and planes during the break is also estimated down 36% from last year, state broadcaster China Central Television reported Friday, with the daily average representing a decrease of 58.1% from 2019.

Despite recent calls to stimulate domestic spending, Covid curbs are still commanding the narrative for consumption. Air tickets this season were the cheapest in five years, and on average 12% lower than prices during Golden Week last year, according to local media, citing figures from booking site Qunar.com.

Cinema tickets also plunged, with sales reaching just 1.4 billion yuan ($197 million) as of 1 p.m. local time Friday, according to online ticketing service provider Maoyan Entertainment. That’s less than a third of the box office for the full seven-day break last year, and also much worse than the nearly 4 billion yuan earned in 2020.

The weak spending figures spell bad news for China’s consumer recovery at a time when economic growth risks are mounting. The slump in the property market shows no signs of easing, global demand for Chinese goods is slowing and the currency is plunging. Several economists say Beijing is unlikely to ease its Covid Zero policy until after March next year.

The deterioration in the world’s second-biggest economy coincides with a broader downturn across Asia in sectors from electric cars to memory chips and online shopping, and may indicate more weakness to come.

High-frequency data covering China’s National Day holiday in the first week of October douse any hope that consumption is steadying -- passenger rail traffic and cinema box office revenue plunged. A skid in home sales in the first three weeks of September added to the weak picture.

Back in China, the formerly bright spot of EVs has taken a hit with shares of Chinese makers plunging in Hong Kong on Friday on predictions of worse-than-expected orders during the holiday period.

China’s markets are due to re-open on Monday with Covid-19 cases at the highest in about a month and authorities facing increasing pressure to curb its spread before the Party Congress.

Despite pleas for residents to stay home during Golden Week, typically a peak period for travel, infections are flaring in holiday spots and there’s been a fresh round of lockdowns from Hainan in the south to Inner Mongolia in the north and Xinjiang in the west. Cities including Hangzhou have also stepped up scrutiny over Covid tests after finding some cases among returnees, while a city in Shanxi province has made it harder for residents to leave its borders after some inbound travelers tested positive.

The rise in cases is stoking concerns about whether similarly tough measures may be deployed more widely in the lead up to the congress, at which President Xi Jinping is expected to secure a precedent-breaking third term in power. Xi has made Covid Zero a cornerstone of his leadership, and Beijing views the measures as key in averting the death tolls seen in other parts of the world despite its growing social and economic costs.