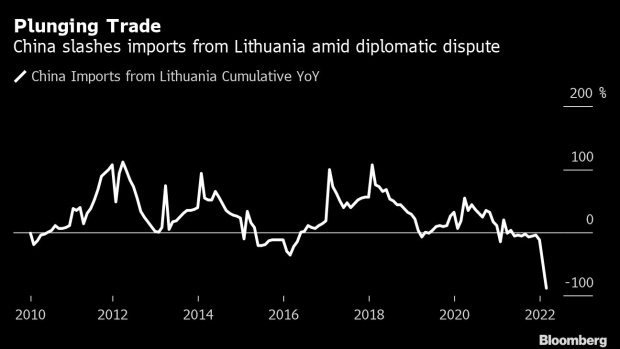 (Bloomberg) -- China slashed the amount of goods it purchased from Lithuania by almost 90% in the first two months of the year after the two countries became embroiled in a political and trade dispute late last year.

Tensions between China and Lithuania have been escalating since Taiwan opened a representative office in the Baltic nation’s capital in November. Beijing, which sees the democratically ruled island of Taiwan as part of its territory, downgraded ties with Lithuania following the move.

Lithuania has since claimed that China applied “unannounced sanctions” on its products, and sought the European Union’s help in lodging a complaint against China at the World Trade Organization over the matter. Beijing has expressed hopes that the EU won’t escalate the issue, saying the lawsuit at the WTO isn’t constructive.