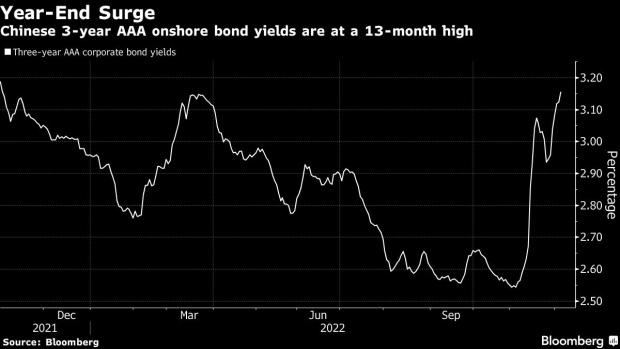 (Bloomberg) -- The mood for risk is seeping into every corner of Chinese markets, with policy moves to ease Covid curbs and revitalize the economy fueling the biggest selloff in years in high-grade local corporate debt.

Yields on most AAA rated domestic corporate bonds jumped at least 10 basis points Tuesday, according to traders. They hit a 13-month high of 3.16% Monday for three-year notes of the same rating, after logging the biggest increase since 2017 last month, according to Bloomberg-compiled data.

The selloff offers the latest evidence of a momentous shift in investor sentiment toward Chinese assets, after optimism about faster economic reopening led to a rally in the country’s stocks and currency in the past month. It also upended a domestic credit market that has shown remarkable calm and avoided massive defaults this year, thanks to Beijing’s monetary easing.

“The selloff is mainly due to the easing Covid policy outlook, as investors are seeking higher returns and moving to riskier assets such as equities,” said Ting Meng, a senior credit analyst at ANZ Bank China Co.

Outflows are continuing to impact the onshore credit market, China Merchants Securities Co. analysts including Yin Ruizhe wrote in a note dated Sunday. They added public funds are looking to shift to assets with better liquidity.

Stress in the local corporate debt market has remained low this year despite the tumult in offshore bonds, where a severe cash crunch among property developers has unleashed a record wave of defaults. In addition to the much lower borrowing costs onshore, cash-strapped builders also have often managed to extend debt maturities to escape official delinquencies.

The latest turmoil has already had a notable impact on domestic bond financing. Firms pulled plans to sell 59.4 billion yuan ($8.5 billion) of local notes in November, nearly five times the year-earlier figure and the highest level since January 2021, according to Bloomberg-compiled data.

--With assistance from Qingqi She.