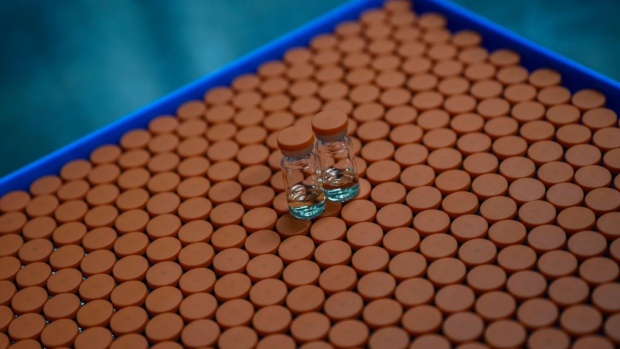 Vials are seen on a tray in a lab at Sinovac Biotech where the company is producing their potential COVID-19 vaccine CoronaVac during a media tour on September 24, 2020 in Beijing , Kevin Frayer/Getty Images AsiaPac

Chinese companies have made a seemingly unstoppable push to the front of the race for a coronavirus vaccine. Yet their speedy ascent has been unhindered by common scientific setbacks being reported by Western rivals, raising questions about how stringently they are vetting and reporting potential safety issues.

The lack of clarity over the standards and safeguards used by Chinese developers is drawing concern because some of their vaccines are being distributed in China under an emergency use program before full regulatory approval. In the U.S., President Donald Trump repeatedly claimed a working shot would be available there ahead of the Nov. 3 election.

That hasn’t panned out as the most optimistic timelines for U.S. emergency use authorization now go into late November and December, well behind China on this front. There are potentially far-reaching implications for the way China goes about its vaccines. The Asian country has the largest number of candidates in late-stage trials, and Chinese shots could be used by millions worldwide because President Xi Jinping has pledged to share successful ones overseas.The U.K.’s AstraZeneca Plc and U.S.-based Johnson & Johnson temporarily halted testing earlier this year after a single participant in each trial got sick, in order to examine the cause. In contrast, China’s science ministry has said its companies have inoculated about 60,000 volunteers in final-stage trials, but there have been no reports of serious adverse events.

One front-runner, China National Biotec Group Co., says it’s vaccinated hundreds of thousands of people under the emergency use program, a sign of how widely Chinese shots are being administered without reports of serious adverse events. Yet scientists say the discovery of health problems are inevitable when tens of thousands of people across ages and with varying conditions are tested -- even if the vaccine isn’t causing the illness.

“Biology is fundamentally messy and you will always get heart attacks, neurological events and other toxicities by pure random chance,” said Michael Kinch, a vaccine specialist at Washington University in St. Louis. “In a large enough population you’re going to see that and so it seems odd, maybe even suspicious, that nothing has been reported at all.”

The author of a 2018 book ‘Between Hope and Fear: A History of Vaccines and Human Immunity,’ Kinch said he’d be concerned about data that are “really, really clean.” He pointed to research published in 2015 in the journal BMC Medicine that examined 202 late-stage trials, and found that only about 10 per cent didn’t mention serious adverse effects. Even this number likely under-represents the pervasiveness of major adverse effects in testing, Kinch said.

Globally, worries about the safety of coronavirus vaccines are rising as researchers across nations work at an unprecedented pace, buffeted by political pressures and an urgency to end a pandemic that’s killed more than 1 million.

China’s companies and officials say their vaccines have been found safe in the research that’s being conducted. The companies have so far said they’ve seen only mild effects, such as low fevers, pain at the injection sites, itchiness, fatigue and dizziness, symptoms consistent with a regular flu vaccine.

A spokesperson at China’s Sinovac Biotech Ltd. said the lack of any reports of serious side effects doesn’t mean the company isn’t being transparent. He pointed to comments from the Instituto Butantan, Sinovac’s trial partner in Brazil, which has said fewer adverse reactions were seen in its coronavirus vaccine than in others tested in the country.

Different methods being used to develop vaccines are leading to the variations in adverse events, the Sinovac spokesman said. Based on its early-stage studies, inactivated vaccines – a traditional technology used by Sinovac that uses a killed version of the pathogen – have been shown to have a low incidence of adverse events, he said.

CanSino Biologics Inc. -- a Chinese company developing a shot using a cold-causing adenovirus as a vector, a similar type of vaccine as J&J and AstraZeneca -- declined to comment. In a statement published on its official WeChat account late October it said its vaccine has good tolerability and safety and there were no serious adverse reactions among participants in clinical trials. China National Biotec Group didn’t respond to request for comment.

Some scientists aren’t convinced. They say that the transparency of Chinese trials doesn’t appear to be at the same level of those in the West, making it hard to assess their rigor.

“Any statement that says when you vaccinated over 100,000 people and see no serious or severe effects cannot be true,” said William Haseltine, a former Harvard Medical School researcher who chairs the non-profit Access Health International and has been a a key player in understanding novel viruses including HIV. “If they want their vaccines to receive international credibility they’ve got to be forthcoming.”

Ezekiel Emanuel, vice provost for global initiatives and co-director of the Healthcare Transformation Institute at the University of Pennsylvania, said there are questions about the way some of the Chinese studies are being run. “There is appropriate skepticism and hesitancy about whether you ought to adopt them,” Emanuel said.

Vaccines typically take years to develop, and that process is now being whittled down to months globally, not just in China. Yet Kinch said it can sometimes take the immune system three or four months, and in rare cases years, to show the effects of toxicity and any damage caused by the vaccination.

China’s latest rules require that suspected and unexpected serious adverse events in clinical trials be reported to regulators. However, it isn’t mandatory for a Chinese company to communicate such problems or related trial pauses to the general public. Neither is that a common practice in the U.S., though the U.S. F.D.A would definitely be made aware, Haseltine said.

Pauses like those taken by AstraZeneca and J&J are drawing unusual attention because the scale of the pandemic and the speed of the trials are putting vaccine developers under the microscope.

The term adverse event can encompass everything from fever, pain, and itching to more serious problems like cancer, heart attacks and even death. They don’t necessarily mean a vaccine is doomed to fail as the benefits of each shot are weighed against its risk. Severe side effects do occur, though rarely, after a vaccine is approved and distributed to the general public.

AstraZeneca and J&J have resumed the trials that had been halted. Regulators and teams of outside experts combed through the existing data on the vaccines and concluded that the unexplained illnesses weren’t triggered by the immunizations.

J&J Chief Scientific Officer Paul Stoffels said the company has found no evidence that the adverse event was linked to its vaccine or the technology that underscores it. “When we have 60,000 people [in a clinical trial], it’s a small village, things happen,” Stoffels said in an interview.

AstraZeneca said its trials had resumed globally, with regulators in several countries confirming it was safe to do so.

China’s expanded emergency use program launched in July is also raising questions. Originally intended for front-line workers -- such as medical staff treating COVID-19 patients or customs officers with exposure risk -- the use of two shots from China National Biotec and one from Sinovac has since been expanded to employees from state-owned companies with missions overseas. Discussions are underway to offer them to students headed abroad. Local media are now reporting that ordinary people can sign up.That has researchers wondering how such large numbers are being tracked. Ding Sheng, director of Beijing-based Global Health Drug Discovery Institute, which has received funding from the Bill & Melinda Gates Foundation, said the absence of severe adverse effects among the Chinese companies shouldn’t be seen as a bad thing. Ding said that emergency use programs differ from controlled trials and the vaccines being given widely “doesn’t necessarily mean bad things will happen.”

Yet he had questions about how people in the emergency program were being assessed. “This is a huge number of people but they are not in clinical trials. How exactly these people are being followed up is unknown,” Ding said. “If they could be more transparent about how they do that, that’ll probably be a better assurance.”

Zheng Zhongwei, a director who oversees coronavirus vaccine development at China’s National Health Commission, said on Oct. 20 that there had been no reports of serious adverse events in the emergency use program so far, and that there is a tracking system for following up with those who receive the shots this way. The National Medical Products Administration, China’s drug regulator, declined to comment beyond the Oct. 20 press conference.

That hasn’t been the experience of one Beijinger, who told Bloomberg he received two shots of a coronavirus vaccine earlier this year, and his family was vaccinated too. The man, who didn’t want to be named because he had signed a non-disclosure agreement, said he experienced no adverse effects, but that there was no follow-up after the vaccination. There was a phone number on the vaccination certificate, but no indication what it was for.

Others Bloomberg spoke to, including an employee at a state-run company, said it was made clear he should contact the developer if there was a serious adverse reaction to the vaccine he received under the emergency use program, but his case wouldn’t be actively tracked.

China National Biotec didn’t respond to queries on the emergency use program. The Sinovac spokesman said emergency use of its experimental shots is provided by the country’s existing inoculation system, which has a monitoring mechanism in place, and that monitoring isn’t done by the company.

Moderna Inc., Pfizer Inc., AstraZeneca, J&J -- the major U.S. and U.K. firms in final stage testing -- have all published detailed protocols with the methods and procedures being followed in those trials. Only one of the three Chinese companies –Sinovac -- now in phase III testing said it’s making its protocol publicly available. That means independent academics have no way to assess how well designed some of the Chinese late-stage trials are. CanSino declined to share its protocol when requested by Bloomberg, while China National Biotec didn’t respond to a Bloomberg query for its trial protocol.

China has said it will make successful shots internationally available through bilateral deals and the Covax initiative to distribute shots.

Yet Chinese vaccine developers face added scrutiny because of the industry’s mixed record at home. Government bodies have in the past spotted issues such as the improper storage of some inoculations. In 2018, consumers protested outside government offices after regulators said two drugmakers, Changsheng Bio-technology Co. and Wuhan Institute of Biological Products Co., had sold ineffective vaccines.

Sinopharm Group Co., the parent of China National Biotec, is also the parent of Wuhan Institute. At the time, it removed an executive from the subsidiary in charge of production and issued stern warnings and fines to others. Changsheng said it halted production of problematic vaccines and felt deep remorse and shame.

Chinese executives say regulatory scrutiny has tightened and so have the vaccine industry’s standards. China’s drug regulator has publicly said will require no or extremely low incidence of serious adverse reactions to approve any coronavirus vaccine.The industry’s quality control and clinical studies are now fully in line with international standards, said Zhang Lan, a vice president at Hangzhou Tigermed Consulting Co, which is running a trial for one of the Chinese coronavirus vaccines, although she didn’t specify which one due to disclosure rules.

“Does the situation arising out of Johnson & Johnson trial have to happen to these Chinese vaccine candidates?” Zhang asked. “I think it’s too early to make a call and we have to wait for the results and data.”