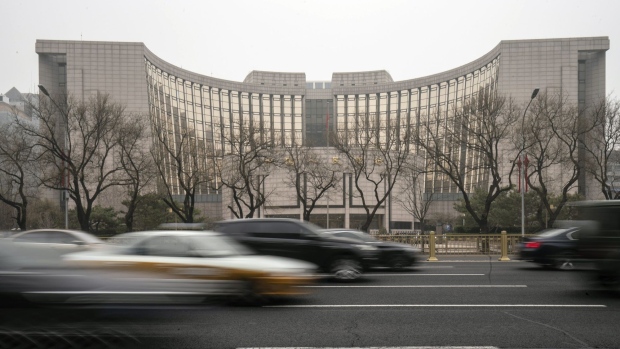 Vehicles travel past the People's Bank of China (PBOC) building in Beijing, China, on Thursday, March 4, 2021. The low cost of borrowing in China’s money markets suggests the central bank again has room to tighten policy by withdrawing liquidity from the financial system -- like it did in January. Photographer: Qilai Shen/Bloomberg , Bloomberg

(Bloomberg) -- Expectations are falling that China’s central bank will ease monetary policy by cutting the amount of cash banks have to hold in reserve, according to a front-page story from the central bank’s own newspaper.

Debate had heated up recently over whether the People’s Bank of China will cut the required reserve ratio to boost the economy, the Financial News said Wednesday. However, with factory-gate prices rising by 10.7% in September, expectations of a cut have significantly weakened, the paper said, citing analysts Zhou Maohua from China Everbright Bank and Zhang Xu from Everbright Securities Co. Ltd.

The PBOC reduced the RRR in July to help support smaller businesses hurt by rising costs. Since then, the bank has kept monetary policy unchanged, despite pressure to cut rates as the economy weakened.

Financial system liquidity is reasonably ample and this shows that a RRR cut is not necessary, Zhou was cited as saying. China’s economy is facing issues such as virus outbreaks, floods, surging raw material costs, power shortages, property market tightening and supply chain disruptions, and a RRR cut won’t solve these, he said. Instead, it could lead to an increase in leverage and divert funding away from the real economy, he said.

The Financial News report comes two days after a government adviser told reporters the PBOC has room to cut the RRR and there shouldn’t be concerns about inflation. His comments were later removed from an official transcript of the briefing.