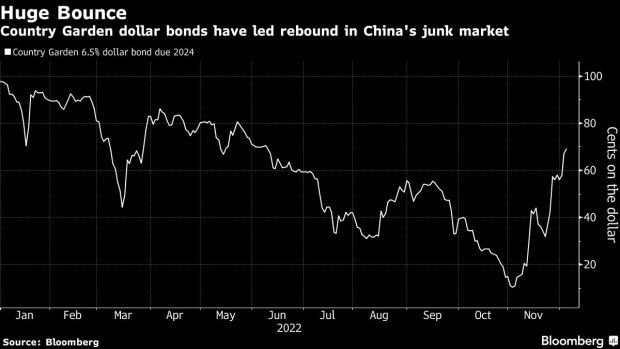 (Bloomberg) -- Dollar bonds of China’s largest developer have returned an eye-watering 404% the past month, highlighting the reversal of fortunes in the country’s property sector as policy shifts have brightened investor sentiment.

Country Garden Holdings Co. notes started slumping in mid-September, just as another round of worry about real estate firms’ liquidity took hold. A dollar bond maturing in 2024 got as low as 10 cents on Nov. 2, according to prices compiled by Bloomberg. By Monday, it was briefly above 70 cents and set for its highest close since June.

Shares have also seen big swings, falling from HK$4.95 on June 30 to HK$1 on Nov. 1 before catapulting back above HK$3 in recent days. Country Garden is one of the best performers since the start of November in a Bloomberg Intelligence stock gauge of Chinese builders.

“It is a private developer with higher leverage than other quality names, so its bonds dropped more when the market was down,” according to Ting Meng, a senior credit analyst at ANZ Bank China Co. “But it is also among developers that haven’t defaulted and one of those receiving policy help,” she said, helping explain Country Garden’s recent dollar-note gains being the largest among China’s high-yield issuers.

That builder-dominated bond market returned 20% overall in November, the best month since 2011 according to a Bloomberg index, after being battered for more than a year by a liquidity crunch that’s resulted in record defaults and an ongoing slide in new-home sales.

But moves to ease policy on the property and Covid fronts -- two key areas behind China’s slowed economic growth this year -- have resulted in a flip to market sentiment.

For some, the newfound positivity may have moved the bond market too far.

“Pricing is a bit distorted now,” said Eddie Chia, portfolio manager at China Life Franklin Asset Management Co. “Everyone knows for a fact that sales will weaken more. Everyone is buying on the hope that they’re not the last buyer.”

--With assistance from Catherine Ngai, Dorothy Ma and Alice Huang.

(Updates index ranking in the third paragraph and adds analyst comments starting in the seventh paragraph.)