China’s trade surplus surged to a record in May as exports fell less than expected, helped by an increase in medical-related sales, and imports slumped along with commodity prices.

Exports decreased 3.3 per cent in dollar terms from a year earlier, beating economists’ estimates, while imports plunged 16.7 per cent. That resulted in a trade surplus of US$62.93 billion. 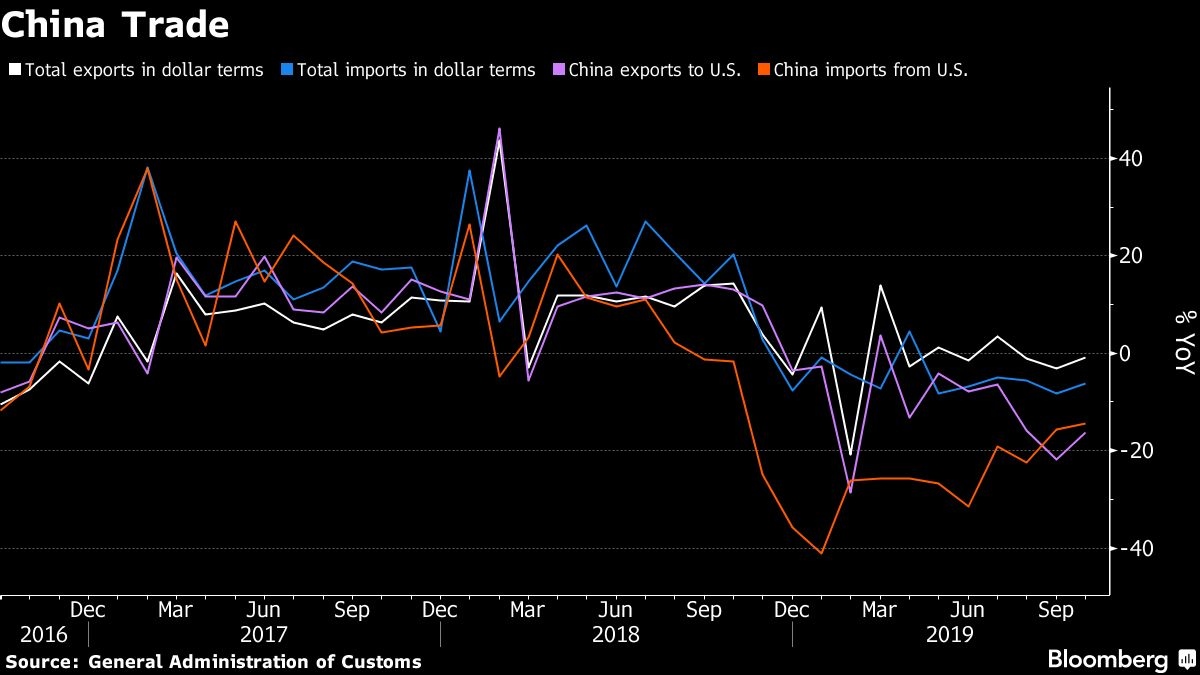 The record surplus comes as the price of commodities China buys such as crude oil, natural gas and soy beans declined. Exports, meantime, have come off their lows, helped in part by sales of masks and other medical supplies as countries around the world battle to stem the spread of the coronavirus.

“The recent acceleration in export growth of anti-epidemic materials contributed considerably to China’s exports,” CICC analyst Liu Liu wrote in a note. “China’s full-year export growth in 2020 may be better than our previous expectations.”

Net exports of goods and services in the second quarter will increase substantially from a year earlier, swinging to a “large positive contribution” to GDP growth after dragging in the first quarter, Liu wrote. Exports of medical devices increased 88.5 per cent, according to CICC.

While China increased commodities imports, the average price has fallen, according to a statement from the customs bureau. The average purchase price of crude oil slumped 21.2 per cent in yuan terms in the first five months of the year, although the volume of purchases rose 5.2 per cent, it said.

The price for coal, natural gas, soy bean and other commodities also dropped. The value of auto imports shrunk by 31.3 per cent.

“The slump in imports is mainly due to a high base from last year and the fall in commodities prices,” said Xing Zhaopeng, an economist at Australia and New Zealand Banking Group Ltd. in Shanghai. “The volume of most major import items rose, showing China’s economy is gradually recovering.”

The export of textile products including masks jumped 25.5 per cent in yuan terms in the first five months, the second-largest export item after mechanical products, according to the customs.

China’s economy continued its slow recovery from the coronavirus slump in May, the earliest indicators showed, with domestic demand gaining momentum while globally it remained sluggish. But the rising risk of an escalation in U.S.-China tensions threatens the outlook for China’s foreign trade.

U.S. President Donald Trump promised to revoke Hong Kong’s special trade status in response to Beijing’s security law, while Beijing has told major state-run agricultural companies to pause purchases of some American farm goods as it evaluates the potential U.S. response over Hong Kong, according to people familiar with the situation.

“China has always opposed the politicization of economic and trade issues,” Gao Feng, spokesman of China’s commerce ministry, said at a briefing Thursday. “In the light of the present situation, there are still many uncertain and unstable factors” weighing on China’s trade outlook, he said.

Exports remained resilient as industrial output continued to recover to normal levels and manufacturers benefit from the shift in supply chains as industrial hubs in the E.U. and U.S. were shut down during the time, according to Rajiv Biswas, APAC Chief Economist at IHS Markit in Singapore.

“With lockdowns ending across the E.U. and U.S., new orders for Chinese exports should gradually recover during the third and fourth quarters as Christmas season supports a rebound in new orders,” he said.