It’s been 11 weeks since Lai Xiaomin, the man once known as the God of Wealth, was executed on a cold Friday morning in the Chinese city of Tianjin.

But his shadow still hangs over one of the most dramatic corruption stories ever to come out of China – a tale that has now set nerves on edge around the financial world.

At its center is China Huarong Asset Management Co., the state financial company that Lai lorded over until getting ensnared in a sweeping crackdown on corruption by China’s leader, Xi Jinping.

From Hong Kong to London to New York, questions burn. Will the Chinese government stand behind US$23.2 billion that Lai borrowed on overseas markets -- or will international bond investors have to swallow losses? Are key state-owned enterprises like Huarong still too big to fail, as global finance has long assumed – or will these companies be allowed to stumble, just like anyone else?

The answers will have huge implications for China and markets across Asia. Should Huarong fail to pay back its debts in full, the development would cast doubt over a core tenet of Chinese investment: the assumed government backing for important state-owned enterprises, or SOEs.

“A default at a central state-owned company like Huarong is unprecedented,” said Owen Gallimore, head of credit strategy at Australia & New Zealand Banking Group. Should one occur, he said, it would mark “a watershed moment” for Chinese and Asian credit markets.

Not since the Asian financial crisis of the late 1990s has the issue weighed so heavily. Huarong bonds -- among the most widely held SOE debt worldwide -- recently fell to a record low of about 52 cents on the dollar. That’s not the pennies on a dollar normally associated with deeply troubled companies elsewhere, but it’s practically unheard of for an SOE.

Fears of a near-term default eased on Thursday after the company was said to have prepared funds for full repayment of a SUS$600 million (US$450 million) offshore bond due April 27. Huarong plans to pay on the due date, according to a person familiar with the matter, who asked not to be named discussing private information.

That’s a drop in the ocean and won’t remove investor concerns. All told, Huarong owes bondholders at home and abroad the equivalent of US$42 billion. Some US$17.1 billion of that falls due by the end of 2022, according to Bloomberg-compiled data.

It wasn’t supposed to be this way. Huarong was created in the aftermath of the ‘90s Asian collapse to avert another crisis, not cause one. The idea was to contain a swelling wave of bad loans threatening Chinese banks. Huarong was to serve as a “bad bank,” a safe repository for the billions in souring loans made to state companies.

Along with three other bad banks, Huarong swapped delinquent debts for stakes in hundreds of big SOEs and, in the process, helped turn around chronic money-losers like the giant China Petroleum & Chemical Corp.

After Lai took over in 2012, Huarong reached for more, pushing into investment banking, trusts, real estate and positioning itself as a key player in China’s US$54 trillion financial industry.

Before long, global banks came knocking. In 2013, for instance, Shane Zhang, co-head of Asia-Pacific investment banking at Morgan Stanley, met with Lai. Zhang said his company was “very optimistic” about the future of Huarong, according to a statement posted on Huarong’s website at the time.

Before Huarong went public in Hong Kong in 2015, it sold a US$2.4 billion stake to a group of investors including Warburg Pincus, Goldman Sachs Group Inc., and Malaysia’s sovereign wealth fund. BlackRock Inc. and Vanguard Group acquired lots of stock too, according to data compiled by Bloomberg. The stock has collapsed 67 per cent since its listing.

Lai had no trouble financing his grand ambitions. A big reason: Everyone thought Beijing would always stand behind a key company like Huarong. It easily borrowed money in the offshore market at rates as low as 2.1 per cent. It borrowed still more in the domestic interbank market. Along the way Lai transformed Huarong into a powerful shadow lender, extending credit to companies that banks turned away.

The truth was darker. Lai, a former senior official at the nation’s banking regulator, doled out loans with little oversight from his board or risk management committee.

One Huarong credit officer said Lai personally called the shots on most of the offshore corporate loans underwritten by her division.

Money also flowed to projects disguised as parts of China’s push to build railroads, ports and more around the world – the so-called Belt and Road Initiative, according to an executive at a state bank. Huarong didn’t immediately reply to questions on its lending practices.

Given Lai’s fate, both people spoke on the condition of anonymity.

Huarong snapped up more than half of the 510 billion yuan in distressed debts disposed of by Chinese banks in 2016. At its peak, Lai’s sprawling empire had almost 200 units at home and abroad. He boasted in 2017 that Huarong, having reached the Hong Kong stock exchange, would soon go public in mainland China, too.

The IPO never happened. Lai was arrested in 2018 and subsequently confessed to a range of economic crimes in a state TV show. He spoke of trunk-loads of cash being spirited into a Beijing apartment he’d dubbed “the supermarket.” Authorities said they discovered 200 million yuan there. Expensive real estate, luxury watches, art, gold – the list of Lai’s treasure ran on.

This past January, Lai was found guilty by the Secondary Intermediate People’s Court in Tianjin of accepting of US$277 million in bribes between 2008 and 2018. He was put to death three weeks later – a rare use of capital punishment for economic crimes. Some took the execution as a message from China’s leader, Xi Jinping: my crackdown on corruption will roll on.

The company on April 1 announced that it would delay its 2020 results, saying its auditor needed more time. The influential Caixin magazine this week openly speculated about Huarong’s fate, including the possibility of bankruptcy. Its credit outlook was put on review for a potential downgrade by all three top rating firms.

According to people familiar with the matter, Huarong has proposed a sweeping restructuring. The plan would involve offloading its money-losing, non-core businesses. Huarong is still trying to get a handle on what those businesses might be worth. The proposal, which the government would have to approve, helps explain why the company delayed its 2020 results, the people said.

Company executives have been meeting with peers at state banks to assuage their concerns over the past two weeks, a Huarong official said.

The Chinese finance ministry has raised another possibility: transferring its stake in Huarong to a unit of the nation’s sovereign wealth fund that could then sort out the assorted debt problems. Regulators have held several meetings to discuss the company’s plight, according to people familiar with the matter. 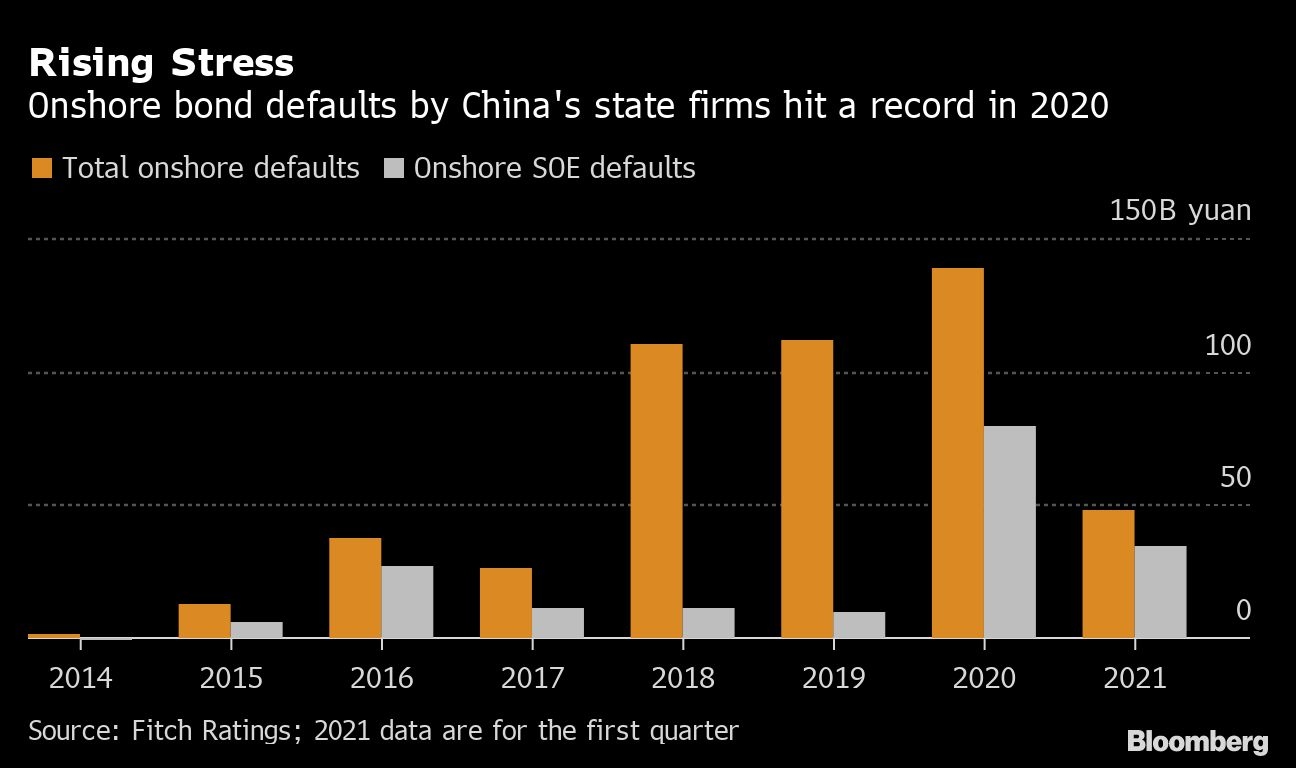 In an emailed response to questions from Bloomberg, Huarong said it has “adequate liquidity” and plans to announce the expected date of its 2020 earnings release after consulting with auditors. China’s banking and insurance regulator didn’t immediately respond to a request seeking comment on Huarong’s situation.

News the company aims to repay a note due this month helped its bonds rebound from record lows on Thursday. It’s not just about cost of funding though, said Thu Ha Chow, a portfolio manager at Loomis Sayles Investments Asia in Singapore. For Huarong to access the market it will need “a clear and definitive commitment,” from China’s finance ministry toward the offshore debt or clarity on a restructuring, she said.

One thing is sure: Huarong is part of a much bigger problem in China. State-owned enterprises are shouldering the equivalent of US$4.1 trillion in debt, and a growing number of them are struggling to keep current with creditors. In all, SOEs reneged on a record 79.5 billion yuan of local bonds in 2020, lifting their share of onshore payment failures to 57 per cent from just 8.5 per cent a year earlier, according to Fitch Ratings. The figure jumped to 72 per cent in the first quarter of 2021.

The shockwaves from Huarong and these broader debt problems have only begun to reverberate through Chinese finance. Dismantling all or part of Lai’s old empire would show Beijing is willing to accept short-term pain to instill financial discipline among state-owned enterprises.

The irony is that Huarong was supposed to fix China’s big debt problem, not cause a new one.

“Allowing a state-owned financial institution that undertook the task of resolving troubles of China’s financial system to fail is the worst way to handle risks,” said Feng Jianlin, a Beijing-based chief analyst at research institute FOST. “The authorities must consider the massive risk spillover effects.”