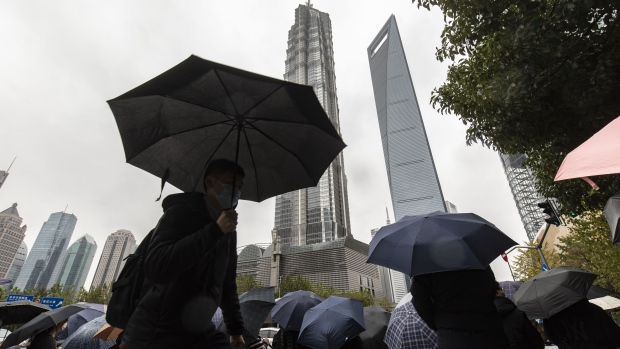 (Bloomberg) -- China’s Politburo, the Communist Party’s top decision-making body, said it will seek a turnaround in the economy next year, pledging to keep fiscal policy active and monetary tools targeted and “forceful.”

Officials will “push for overall improvement of the economy” by focusing on the quality of growth and keeping the pace of expansion reasonable, the official Xinhua News Agency said Wednesday in a readout of the meeting. They will also try to “significantly boost market confidence.”

“We should seek growth while prioritizing stability,” according to the report. “We will continue to implement an active fiscal policy and prudent monetary policy, strengthen the coordination of various policies, and optimize Covid prevention and control measures, to form synergy in promoting high quality development.”

The phrasing “Dynamic Zero Covid,” which the Politburo stressed it would persist with at its July meeting, did not appear in the statement.

The statement suggests a pro-growth stance from the Politburo, economists said, as Beijing gradually eases Covid controls and shifts attention to bolstering the economy’s recovery.

“Overall, the tone appears to reflect that the leadership wants to boost the economy next year,” said Raymond Yeung, chief economist at Australia & New Zealand Banking Group Ltd. “The government will likely set a GDP target of no less than 5% or even 5.5%.”

China’s benchmark CSI 300 Index of stocks fell 0.2% as of the mid-day break amid broad weakness in Asian equities, after gaining the previous two days. The yield on 10-year government bonds was little changed, while the onshore yuan strengthened 0.2% at 6.9812 per dollar as of 12:04 p.m. local time.

Policymakers have taken significant steps recently to address the biggest economic headwinds, relaxing some Covid controls and announcing a spate of rescue measures for the struggling property sector. The government is set to announce a further relaxation of Covid restrictions as early as Wednesday, Bloomberg reported.

Fiscal policy will be kept active next year with a focus on improving its efficiency, according to the Politburo statement, suggesting a ramping up of stimulus.

On monetary policy, the Politburo stuck to its description that measures will be “prudent,” while adding that they should be “targeted and forceful.” That’s in contrast to the language in the central bank’s report last month, which said monetary policy will be “flexible and appropriate.”

Economists have broadly expected the central bank to keep monetary policy relatively loose into at least early next year. The economy is expected to face bigger pressure from spiking Covid cases in the early stages of China’s reopening.

The People’s Bank of China “needs to keep the easing stance until the economy truly begins to normalize, which may not start sustainably until the second quarter or even the third quarter next year,” said Yao Wei, head of research and chief economist for Asia Pacific, at Societe Generale SA.

“The absence of any reference to Covid Zero in the Politburo’s statement Wednesday is a striking — if expected — affirmation that policy is swinging decisively away from a growth-constraining stance.”

“Economic work in the next phase is expected to focus on addressing the weakness in effective demand,” said Bruce Pang, chief economist and head of research for Greater China at Jones Lang LaSalle Inc.

The Politburo also vowed to “invigorate the entrepreneurial vitality of the whole society” in its call to implement economic policy — remarks that appeared to acknowledge a lack of empowerment felt among lower levels of government, along with the business sector.

“It is necessary to persist in hard work,” the Politburo statement said, adding it will “let cadres dare to do things, local governments dare to break through, enterprises dare to forge, and the masses dare to pioneer.”