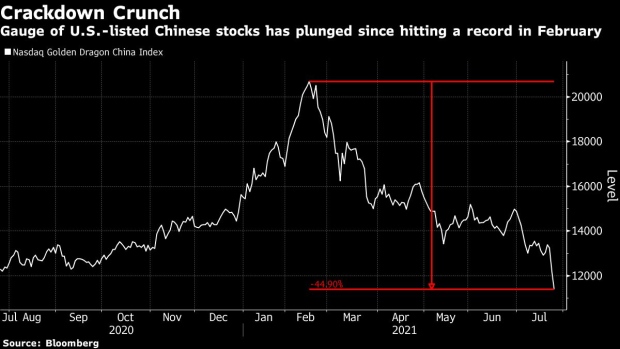 (Bloomberg) -- Beijing’s sweeping crackdowns of its technology and education sectors has unleashed shockwaves across global markets, causing U.S.-listed Chinese stocks to post their biggest back-to-back losses in over a decade.

The Nasdaq Golden Dragon China Index plunged 5.6% Monday morning after regulators in China unveiled an overhaul of its education sector that bans firms that teach school subjects from making profits, raising capital or going public. The gauge -- which tracks 98 of China’s biggest firms listed in the U.S. -- is on pace for its biggest two-day drop since 2008 and has lost more than $740 billion in value since reaching a record high in February.

“The regulatory uncertainty is significant and is something that is impossible for investors to quantify,” said Michael O’Rourke, chief market strategist at JonesTrading. “Investors should be cautious until the Chinese government affirms the legality of these structures,” he added.

Some of large investors have already started to unload their shares. Cathie Wood’s flagship Ark Innovation ETF cut its holdings of China stocks to less than 0.5% this month from a high of 8% in February. The fund completely exited its position in tech-giant Baidu Inc. and has just 134 shares of Tencent Holdings Ltd. Its only other position, Chinese property site KE Holdings Inc., has dropped 58% so far this year.

TAL Education Group, New Oriental Education & Technology Group Inc. and Gaotu Techedu Inc., some of China’s largest education companies, are all down at least 25% each Monday, adding to their record declines from Friday.

The trio has seen their shares stuck in an extended plunge for much of the past five months, bringing their loss for the year to nearly 93%.

They’re not alone either. In total, more than $100 billion in market capitalization has been erased from Chinese education stocks traded in the U.S., China and Hong Kong this year.

“Given the magnitude of the uncertainties, it is challenging for us to quantify the overall risks at this point, but it is clear that we are entering an uncharted territory with substantial moving parts,” according to Benchmark analyst Fawne Jiang.

While the pain has been felt the most by education stocks, other sectors may soon be under the gun as well.

Property management stocks traded in Hong Kong tumbled on Monday after regulators said they were aiming to “notably improve order” in the market. Meanwhile, food-delivery giant Meituan saw its shares plunge by a record 14% as authorities in Beijing issued a notice that online food platforms must, among other things, respect the rights of delivery staff and ensure workers earn at least the local minimum income.

(Adds chart and updates pricing throughout)