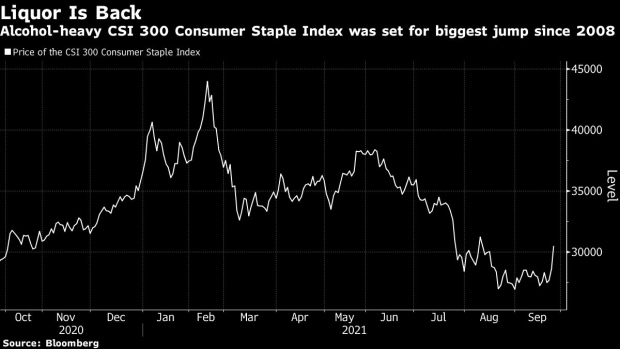 An employee collects bottles of Moutai baijiu from a cart at the Kweichow Moutai Co. factory in the town of Maotai in Renhuai, Guizhou province, China, on Thursday, Dec. 14, 2017. Moutai baijiu's fiery flavor and potential to appreciate in price is driving blistering demand. That in turn has pushed its market value to more than $145 billion, well past British whisky giant Diageo Plc. Photographer: Qilai Shen/Bloomberg , Bloomberg

(Bloomberg) -- Shares of Chinese liquor drove advances in the mainland market, even as materials stocks fall due to concerns over power curbs that have hurt large swathes of manufacturing in the country.

Liquor giant Kweichow Moutai Co. climbed as much as 10% while Luzhou Laojiao Co. also soared by the daily limit. The CSI 300 Consumer Staple Index jumped as much as 8.4%, set for the best day since 2008.

Pledges by Moutai’s new chairman Ding Xiongjun at a Friday shareholders’ meeting on long-term reforms, such as changes in distribution channels and pricing, should boost the prospects of rising selling prices as well as volumes, Sinolink Securities Co. analysts including Liu Chenqian wrote in a note. They expected an “acceleration period in earnings” next year and in 2023.

Material stocks, however, were the leading losers in the benchmark on Monday as many provinces in the country continue to struggle to supply electricity to factories and even households. Inner Mongolia BaoTou Steel Union Co. and China Northern Rare Earth Group High-Tech Co. were among the biggest drags on the index, each tumbling at least 9.8%.

The CSI 300 Index rose as much as 1.5%, with more than half of the 10 top performers being alcohol producers.

The rebound in liquor stocks followed months of sell-offs in the shares due to high valuations as investors rotated into other sectors such as energy and utilities. The consumer staple subgauge of the CSI 300 index was still down around 30% from a February high despite Monday’s spike, the worst among all sectors.

(Adds chart under the second paragraph and background at the bottom.)