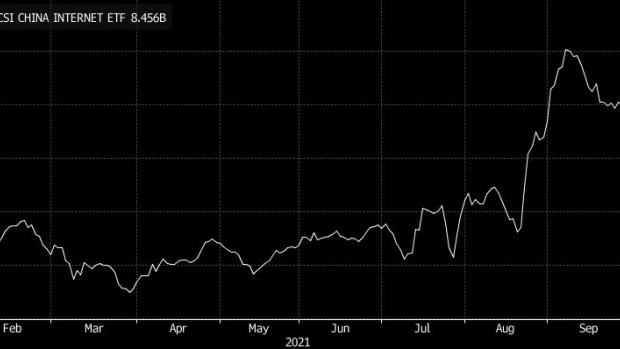 Since slumping to a low in mid-August, KraneShares CSI China Internet Fund (ticker: KWEB) -- which holds shares of 53 U.S.-listed Chinese tech companies -- has jumped 21%. Cash flooding into the exchange-traded fund has also helped buoy total assets to a record $8.1 billion on Tuesday.

According to Todd Rosenbluth’s head of ETF and mutual fund research at CFRA Research, traders have grown more resilient and “willing to ride out volatility” of China’s tech sector given the long-term benefits of increased internet adoption in developing economies.

Read more: U.S.-Listed Chinese Stocks on Track for Best Month in a Year

In recent months, scrutiny from the Chinese government soured sentiment over the region’s most coveted tech and media companies. Most notably, the crackdown hurt Jack Ma’s Alibaba Group Holding Ltd., a top holding in the KraneShares fund. Those concerns have started to ebb. Chinese President Xi Jinping promised this week to further support development of key technologies even as he moves to tighten regulation.

With short interest in KraneShares’ China Internet ETF at its lowest since late 2018, the fund could be on the brink of a breakout as investors see its underlying assets on discount.

“Investors like a deal, and with the market clobbered as of late investors may be looking to pick their bottom,” said Sylvia Jablonski, chief investment officer and co-founder at Defiance ETFs.