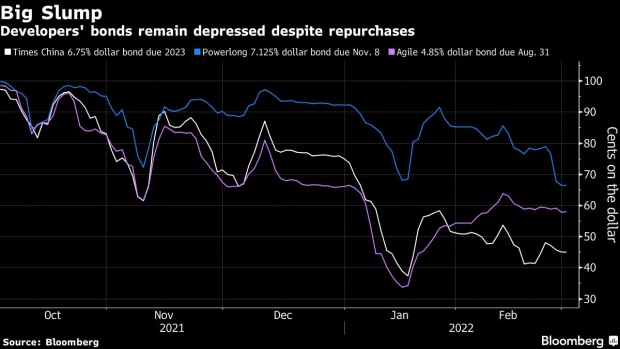 An unfinished building at China Evergrande Group's Health Valley development on the outskirts of Nanjing, China, on Friday, Oct. 22, 2021. China Evergrande Group pulled back from the brink of default by paying a bond coupon before Saturday’s deadline, giving the property giant at least another week to come to grips with a debt crisis that has rattled investor confidence in the world’s second-largest economy. Photographer: Qilai Shen/Bloomberg , Bloomberg

Chinese builders’ dollar notes have undergone months of price declines as the industry deals with a liquidity crisis that’s helped fuel a record level of defaults. Meanwhile, slumping new-home sales have pressured a key cash source. But some builders have been using the bond selloff to pare debt levels at prices well below face value.

Buybacks in general have done little to bolster sentiment for the sector. According to Nomura International (Hong Kong) Ltd. analysts Jizhou Dong and Stella Guo, Powerlong’s repurchases are “one of the best ways to address any potential market concerns on the company’s financial status, as well as strengthen the market’s confidence” in the firm.