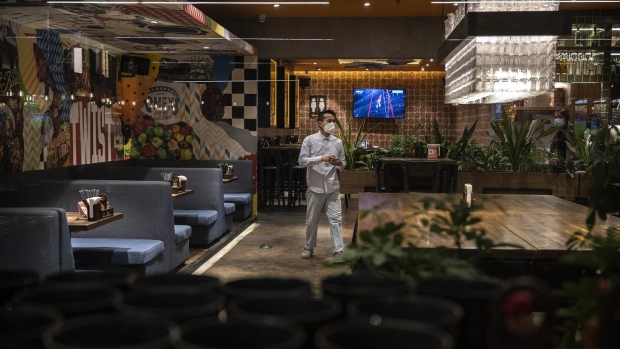 A worker wears a mask as he stands in an empty restaurant after local authorities allowed restaurants to re-open for inside service after nearly three weeks in Beijing on Dec. 6. , Photographer: Kevin Frayer/Getty Images

(Bloomberg) -- Economists at JPMorgan Chase & Co. said economic growth of around 5% is “achievable” for China next year depending on how the nation’s new leadership team oversees a reopening after years of pandemic lockdowns.

“As the Covid drag gradually fades into the middle of next year, economic growth may receive higher priority,” economists led by Haibin Zhu wrote in a research note dated December 8. “2023 will be the first year under the leadership of the new economic team after the 20th Party Congress. It will also be the transitional year for China’s Covid policy shift.”

JPMorgan for now is projecting growth of 4%, with 5.3% a “bull” scenario in the case where policymakers oversee “an orderly, well-prepared and clearly guided reopening.”

Senior Chinese officials are debating a growth target for next year of around 5%, Bloomberg News reported on Wednesday, citing people familiar with the discussion, as Beijing shifts gears toward bolstering the recovery.

The median estimate among economists surveyed by Bloomberg is currently a 4.8% increase in GDP for China next year. A number of analysts, including those at Barclays Plc, are panciling in less than 4%.

Along with Covid policy, the housing market outlook and fiscal policy stance will be critical next year, according to JPMorgan’s team.

The Wall Street bank’s base case had assumed a significant reopening of the economy happening only in the spring, but “the risk clearly has shifted toward an earlier reopening,” the economists said.

Key to watch will be when China officially downgrades the pandemic’s effective risk level, and whether cross-regional travel will be normalized before or after the Lunar New Year holidays in late January, JPMorgan said.