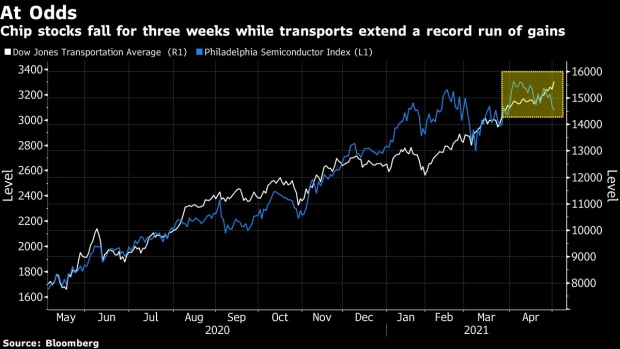 The Dow Jones Transportation Average just climbed for a 13th straight week, the longest winning streak on record. The rally, accompanying the industrial average’s ascent to an all-time high, sent a confirmation signal to the adherents of the century-old Dow Theory that equity gains have further to run after a $5 trillion rally in the first four months of 2021.

Contrasting with the gains is a three-week decline in the Philadelphia Semiconductor Index. The dichotomy likely reflects a rotation from pandemic beneficiaries like technology to stocks that are poised to gain from an economic reopening, such as airlines. To J.C. O’Hara, chief market technician at MKM Partners LLC, the weakness in semi stocks in the face of better-than-expected results is worrisome. Some investors consider chipmakers, already suffering from production constraints, as analogous to railroads for the electronic age.

“The rotation is the life blood of bull markets. Leadership is allowed to change,” O’Hara said. “When stocks like semis stop reacting positively to good news, we need to exercise caution.”

The divergence continued on Monday when the Dow transportation index climbed almost 2% to a record, while the semiconductor gauge fell for a fourth day in five. The last time the two went in opposite directions for at least three consecutive weeks, in January 2018, the S&P 500 peaked out that month before falling into a 10% correction.

Not everyone considers the weakness in chip stocks an ominous sign. While the underperformance highlights the anxiety of investing in an industry with relatively short boom and bust cycles, said Jerry Braakman, chief investment officer of First American Trust, the fact that chipmakers can’t meet growing demand indicates a robust economy.

“We’re in the midst of a chip supply constraint. For a lot of industries, it happens at times, and a lot of times it corresponds with economic strength, because the ramp-up of supply takes time,” Braakman said. “These are all great signs we are in this recovery, it’s heating up.”