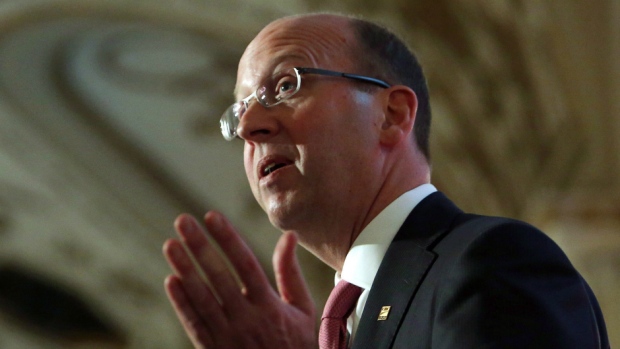 OTTAWA -- The chief executive at one of Canada's biggest banks is supportive of a new package of federal measures aimed at easing risks in the country's real estate system.

"It's always a balancing act making sure that the housing market and the construction sector stay robust and employment stays robust, making sure that the banks continue to lend prudently and that consumers are borrowing prudently," Dodig told The Canadian Press in an interview after his appearance at the Public Policy Forum on economic growth in Ottawa.

"So, I think it's a prudent measure to continue to make sure there's stability in the system."

The government also proposed consultations on a policy that could see banks shoulder more of the risk for mortgage defaults.

Dodig said he expects the consultations around so-called "lender risk sharing" to be constructive.

"It's been a hallmark for us to always work together," said the CEO of CIBC.

"I think the goal of the government is to make sure that the taxpayer is not on the hook to support financial institutions in a perceived or real way."

Morneau's announcement last week came amid concerns that real estate costs in the hot Toronto and Vancouver markets are out of reach for many Canadians. Some fear foreign investment in these areas has helped drive up prices.

Later Wednesday, Morneau was asked during his appearance at the same Ottawa conference about concerns over potential impacts the housing changes could have on Canadians, including first-time home buyers.

He said impacts will always accompany decisions that are meant to deal with long-term risks.

The changes, he added, will potentially delay purchases for some buyers until they save up more for a bigger down payment or they might force some people to buy a home that's a slightly better fit for their income.

Morneau said the government's goal is to ensure long-term stability for the market in a low-rate environment, which has seen the overall indebtedness of Canadians become a "significant challenge."

On the economy, Dodig spoke about his efforts to promote the creation of a growth fund for Canadian small and medium-sized businesses, similar to one launched in the United Kingdom.

He said the fund would seek to fill financing gaps by offering long-term capital to companies in their early stages — but those already past the initial venture capital funding stage.

The fund would also include an expert advisory group to help firms access talent, important networks and mentorship advice from people who have expertise in commercializing and scaling businesses.

Dodig said he's received an increasing level of support for the idea from Morneau, Economic Development Minister Navdeep Bains and stakeholders in the private sector.

He said he hoped to see it launched sometime next year.