Canada's income gap is much worse than we thought: CIBC's Tal

CIBC Deputy Chief Economist Benjamin Tal is sounding the alarm over the widening income gap wrought by the COVID-19 pandemic.

Tal said Monday that the divergent job trends among the lowest and highest earners in Canada is far worse than originally feared, exacerbating long-running issues of income inequality.

“Which means that the income gap is much worse than we thought because not only are we seeing the number of jobs in low-paying sectors going down but also we’re seeing a significant increase in well-paying jobs.”

Nationally, employment in professional, scientific and technical services, a rough proxy for higher-paying jobs, was 4.8 per cent higher in December than it was in February, just before the pandemic hit, according to data from Statistics Canada. In contrast, employment for Canadian youth aged 15 to 24 remains 10.5 per cent below pre-pandemic levels. 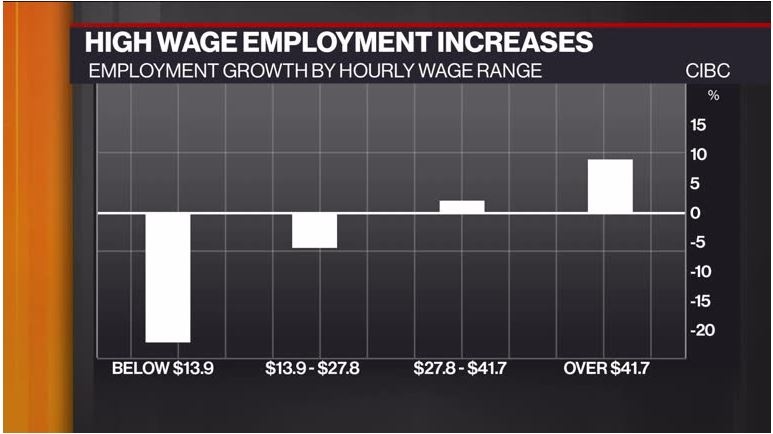 Tal said that evidence of a so-called “K-shaped” recovery - where the top income group bounces back from the worst of the economic shock while the bottom group falters - should prompt governments to implement more targeted measures to support struggling Canadians.

“The next stage of government support must be extremely targeted. This data suggests maybe we haven’t been wasting resources the way we thought because it was being masked by the increase in high-paying jobs,” he said.

“At the same time, we still know that a lot of money is being utilized in not a very efficient way at this stage.”

Tal said that given the information at hand, governments may be tempted to raise taxes on higher earners once the worst of the pandemic is in the rearview mirror in a bid to close that income gap with lower-earning Canadians.

“Here we see a very, very significant asymmetrical picture, and it would be very tempting for governments to actually look at taxation down the road when we are safely far away from the crisis to raise taxes, and I think they will.”