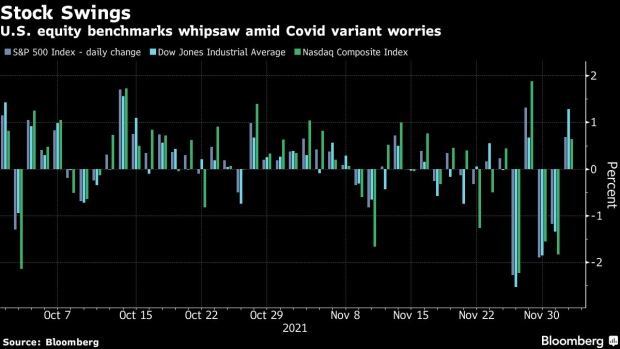 (Bloomberg) -- It will take more than omicron to knock U.S. stock exchanges and market makers off their game.

Michael Blaugrund, the New York Stock Exchange’s chief operating officer, said he awoke on the day after Thanksgiving to signs that the new Covid-19 variant was roiling U.S. markets. Still, he was confident the NYSE could handle the crunch, having spent the previous 18 months watching markets whipsawed by the pandemic.

“What was unthinkable in terms of system needs has became regular,” Blaugrund said in an interview. “Technology will continue to grow and retool -- it’s important that markets operate predictably.”

The Cboe Volatility Index, a gauge of market ups and downs, is close to its highest level since January. More signs of turbulence: The S&P 500 slumped 2.3% on Friday, jumped 1.3% on Monday, and then shed 1.9% on Tuesday. The 10-year Treasury yield tumbled to as low as 1.4% from 1.67% before the holiday, and West Texas Intermediate crude oil sank more than 16%.

While volatility isn’t unusual, the level of convulsions, especially at the start of the pandemic, has been extreme. Tumbling U.S. stocks triggered trading curbs known as circuit breakers on several days in March 2020. Adding to the market spasms have been pandemic-induced lockdowns and the rise of zero-commission trading platforms.

“We’ve been through so many extreme events over the last two years,” said Joe Mecane, head of execution services at Citadel Securities. “Days like this do become normal despite the fact that headlines cause some shock to the system,” he said, referring to the day after Thanksgiving.

It’s also an indication of market resilience in the face of heightened volatility, he said, noting that the U.S. equities market has traded an average of some 9 billion to 10 billion shares every day since the first quarter. On Monday, as markets braced for a renewed period of uncertainty, it hit 11 billion, he said.

Of course, volatility can spell boom times for firms like Citadel Securities, which is a market maker that provides liquidity trade execution to institutional and retail clients. The firm, founded by Ken Griffin, posted $6.7 billion of net trading revenue in 2020, almost double the previous high in 2018.

Increased volatility can also shift more trading to exchanges such as Nasdaq, and makes matching orders on an off-exchange, or so-called dark pool, more difficult, Tabb wrote in a report.

Ronan Ryan, president and co-founder of IEX Group Inc., the stock-exchange operator made famous by Michael Lewis’s “Flash Boys,” was sipping cocktails on a catamaran in the British Virgin Islands when he started grappling with the post-holiday market volatility.

“The exchanges have proven that we’ve done our event management correctly,” Ryan said. Any concern about handling volume spikes has dissipated given the level of volatility and testing over the past 18 months, he said.

Still, Friday’s market swings were something of a surprise given that day is usually “as dead as a doornail,” he said. “A lot of people got over their Thanksgiving hangover and got trading.”

Before the pandemic, IEX was handling about 1 billion “messages” a day, which include orders and trades. The new normal is roughly 2 billion to 3 billion, and Friday’s level was 2.5 billion, Ryan said, adding that IEX saw a record number of retail brokers participating that day even though it was a half-day session.

It was also the fourth-busiest day for IEX’s retail-trading volume since the exchange operator implemented changes to that program in October.

“This has been a total shift in the total retail-trading experience,” said Reggie Browne, who runs ETF market making at GTS Securities, an electronic market maker. His colleague Joe Pleffner, who runs GTS’s wholesale and retail market making, sees that continuing.

“As active as they have been, they will continue to be active,” Pleffner said. “Retail can’t stay away from trading.”