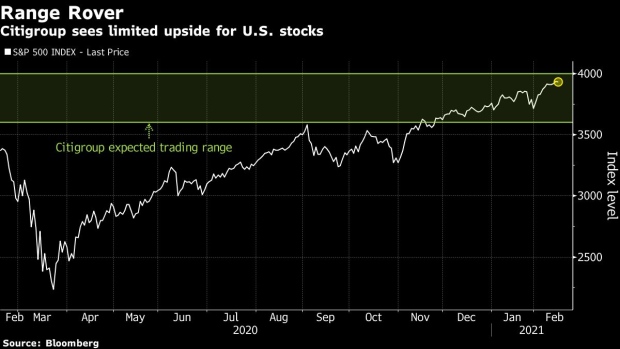 The New York Stock Exchange (NYSE) is reflected in a puddle in New York, U.S., on Monday, Jan. 4, 2021. In a historic year that marked a rapid plunge into bear market territory and a swift recovery into the bull zone, high-flying technology stocks and electric-vehicle pioneer Tesla Inc. were standout trades. Photographer: Michael Nagle/Bloomberg , Bloomberg

(Bloomberg) -- A 10% pullback in U.S. shares seems “very plausible” with markets balanced on a risk-reward basis, according to Citigroup Inc.’s Tobias Levkovich.

U.S. stocks are not in a bubble and comparisons with the early 2000s don’t stack up as the economy is exiting, not entering, a recession and the Federal Reserve isn’t raising rates, according to Levkovich. That suggests a deep selloff in stocks is unlikely, he said.