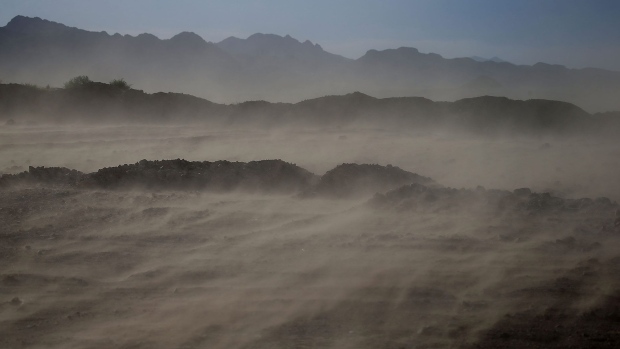 LAKE MEAD NATIONAL RECREATION AREA, NV - MAY 12: Wind kicks up dust along Boulder Beach at Lake Mead on May 12, 2015 in Lake Mead National Recreation Area, Nevada. As severe drought grips parts of the Western United States, Lake Mead, which was once the largest reservoir in the nation, has seen its surface elevation drop below 1,080 feet above sea level, its lowest level since the construction of the Hoover Dam in the 1930s. (Photo by Justin Sullivan/Getty Images) , Photographer: Justin Sullivan/Getty Images

(Bloomberg) -- Dust storms, billowing walls of sand and dirt seen in the dry areas around the world, doubled in prevalence from the 1990s to 2000s in the American Southwest, and have previously been associated with increased health care usage. Data now suggest these weather systems in the U.S. may be associated with increased intensive care unit admissions as well, and climate change is an underlying factor.

The first national study on how the weather systems affect U.S. ICUs shows storms were associated with a 4.8% increase in local admissions on the day of the event. Respiratory admissions increased by 9.2% on the day of the storm and again by 7.5% five days later. This second increase could be due to several causes, the authors write, including a slowly worsening respiratory condition, a lack of access to care, or conditions with a longer incubation period such as meningitis or influenza.

“There is a statistically significant increase in ICU admissions on the day of these dust storms,” said Caitlin Rublee, an emergency medical physician and co-author of the study. “We cannot say this is causal, but there is a strong association.”

July and August saw the most dust storms, raising concerns that the systems could compound critical care resource issues resulting from the coronavirus pandemic, Rublee said.

A hypothetical severe dust storm could increase U.S. ICU admissions by nearly half on the first day and challenge providers’ capacities, according to a model in the new study. The prevalence of dust storms in the Southwest has increased dramatically over the past 30 years, and has been linked to changes in ocean temperature. Drought and increased heat, both of which climate change is making worse, can exacerbate conditions for the storms.

“The greatest long-term concern is that we urgently and deliberately need to address climate change to improve human health, especially for vulnerable populations,” Rublee said. She also called for public health prevention measures, like warning vulnerable populations to stay indoors during storms and increasing staffing in critical care units to handle rising demand when storms are in the forecast.

The study sampled between 15% and 20% of U.S. ICU data from 2000 to 2015, along with National Weather Service data on more than 800 dust storms during that same time period. The researchers factored in both air pollution and meteorological data based on zip codes.