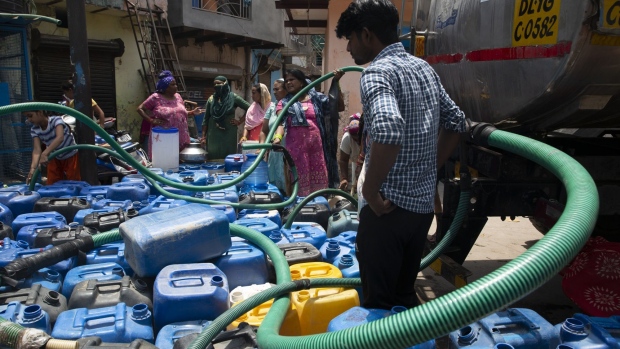 Residents of New Delhi fill containers from a water tanker on May 13. , Bloomberg

(Bloomberg) -- Climate change made a two-month heat wave in India and Pakistan 30 times more likely and a degree Celsius hotter than the average daily high would have been otherwise, according to an analysis of March and April temperatures published today by the World Weather Attribution initiative.

The heat wave, which is ongoing, led the Indian government earlier this month to limit wheat exports after the heat cut yields by roughly 20%. That reversed previously announced moves by India, the world’s second-biggest wheat producer, to help boost the global supply, devastated by Russia’s invasion of Ukraine.

The loss of Indian wheat when Ukrainian agriculture is under siege “is really significant, because it’s showing how climate change is fueling impacts that ripple across to other parts of the world, not just the place where the heat wave is occurring,” said Roop Singh, a climate-risk adviser at the Red Cross Red Crescent Climate Centre and a WWA participant.

The WWA results are inherently conservative because the temperature record under study began only in 1979. Incorporating older Indian data beginning in 1951 and output from 20 climate models into their methodology, researchers found the heat wave to be a once-a-century event at the current level of global warming, about 1.2° Celsius above the pre-industrial average. The relatively short data sets made it challenging to narrow the probability window onto what happens next. Similar heat waves might accelerate between anywhere from two to 20 times, meaning that a once-a-century event could be expected as rarely as twice a century or as frequently as every five years after 2°C of global warming.

A recent UN climate assessment emphasized the growing importance of adaptation to heat and other climate-related disasters, and the critical role international finance plays in achieving it.

South Asia is both particularly at risk and beginning to prepare populations for growing threats. Heat waves have caused public health emergencies in recent years, globally and in South Asia in particular. An estimated 345,000 people older than 65 died from heat-related causes in 2019, a record. A 2015 heatwave in Karachi was responsible for 1,300 deaths and 65,000 hospitalizations. Ahmedabad, India, lost 1,344 people in 2010.

The latter disaster prompted action that is already bearing results: Ahmedabad issued and has since updated a heat action plan and early warning system that has been credited with avoiding almost 1,200 deaths a year. Similar plans now exist in 130 Indian cities and towns.

A National Action Plan on Heat Related Illness started last year in India, with a goal to disseminate life-saving advice for heat waves, including not exposing the head to direct sunlight and wearing light, natural-fiber clothing. Hospitals have established wards for heat-related ailments and put in place a backup power supply to ensure that cooling equipment works. Rolling blackouts have jeopardized power in at least 16 of India’s 28 states this spring. Heat is more dangerous in lower-income areas, where tin roofs and other structural risks exacerbate already vulnerable conditions.

Karachi and other Pakistani cities now have heat action plans, which have led to cooling centers in mosques, malls and other public buildings. As a part of its program submitted to the UN climate process, Pakistan announced a cooling action plan that it expects to be in place by 2026.

“The main message to take away here is that adaptation to heat has been the absolute central thing in  every part of the world, but especially also in this part of the world,” said Friederike Otto, senior lecturer in climate change at Imperial College London and lead of World Weather Attribution.

The UK Met Office last week issued another analysis quantifying the effects of climate change on the South Asian heat wave, relative to a record-shattering spell in 2010.

The analysis of the heat wave comes as flooding to the east, in India and Bangladesh, has caused dozens of deaths and dislocated millions. Nothing suggests a meteorological connection between the western heat and eastern flooding in advance of the annual monsoon, which this year is expected a week or more early, according to Arpita Mondal, a climate researcher at the Indian Institute of Technology Bombay and WWA co-author.