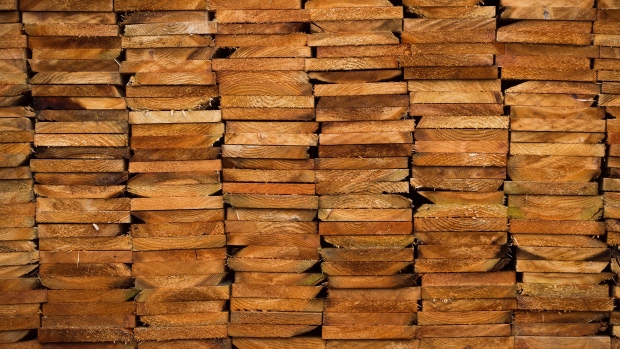 A stack of western red cedar wood is seen at CedarLine Industries in Surrey, B.C. , The Canadian Press

VANCOUVER -- Canfor Pulp Products is temporarily shutting down one of its northern British Columbia pulp mills -- just days after parent company Canfor Inc. announced breaks at all but one of its B.C. sawmills and the permanent closure of another.

The Vancouver-based company says reasons include weaker market conditions and a short-term lack of wood supply due to slowdowns at its sawmills elsewhere in the province.

All Canfor sawmills except the WynnWood operation in southeastern B.C., are to shut down for at least two weeks starting on Monday, and the mill in Vavenby, north of Kamloops, is to close permanently in July.

Employees have been told the shutdown is to begin Aug. 9, and a company statement says declining housing starts, high wood costs and other pressures forced its decision.

Forests Minister Doug Donaldson blames market changes and timber killed by pest infestations. He said transition teams are on the way to communities where mill closures have the potential to affect hundreds of direct and indirect jobs.

"The fact is that we knew this day was coming, as far as the constriction on the fibre supply, at least 10 years ago," Donaldson said.

"We've taken steps to address it in the last 22 months and, unfortunately, the previous government didn't over 16 years, so we're determined to make forestry an important part of rural communities."

Donaldson has warned that tough decisions lie ahead as transition plans are developed, but B.C. Liberal Leader Andrew Wilkinson accused the NDP government of failing to do anything to help affected workers.

Wilkinson has called for creation of an all-party forestry competitiveness committee and the immediate reduction of stumpage fees and carbon tax paid by the forestry sector.

"This is failed leadership on the part of (Premier) John Horgan, plain and simple," Wilkinson said in a statement.

It has been a difficult few months for British Columbia communities dependant upon the forestry industry.

In addition to the plans by Canfor and Louisiana-Pacific, Toronto-based Norbord Inc. announced this week that an indefinite shutdown is to begin in August at its oriented strandboard mill in 100 Mile House affecting 160 workers.

In May, privately owned, Vernon-based Tolko Industries announced its Quesnel sawmill is to close permanently in August, putting 150 people out of work, while 90 workers will be affected when half the shifts at its Kelowna mill are cut in July.

Aspen Planers Ltd., based in Merritt, also cut 50 per cent of the shifts at its Merritt mill earlier this week, resulting in 50 layoffs.