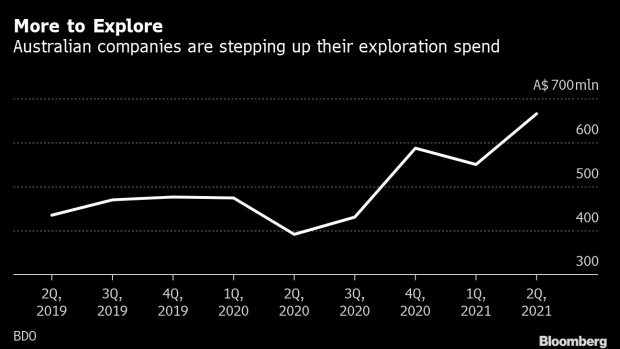 (Bloomberg) -- Australian companies’ spending on resources exploration at home and abroad hit the highest in seven years in the June quarter, spurred by strong price gains across a range of commodities as the global economy recovers from the pandemic.

Explorers listed on the Australian Stock Exchange spent A$666 million ($488 million) in the three months to June 30, according to a study by business advisory firm BDO. That was 34% above the two-year average and the highest quarterly spend since the March quarter of 2014.

BDO said explorers were raising funds at record-breaking levels, which was likely to support a further acceleration in spending to historic highs by the end of the year.

“Initial concerns around Covid-19 and its impact on the exploration sector have been swiftly mitigated by the prompt sector recovery underpinned by strong commodity prices and favorable financial markets,” Sherif Andrawes, BDO’s global head of natural resources, said in a media release.

Still, the industry was being constrained by limited availability of resources, Covid-related travel restrictions and skilled labor shortages, the report said. Australia’s biggest city Sydney was plunged into lockdown at the end of June to try and contain an outbreak of the delta variant, while the country’s international borders have been closed since the pandemic began last year.