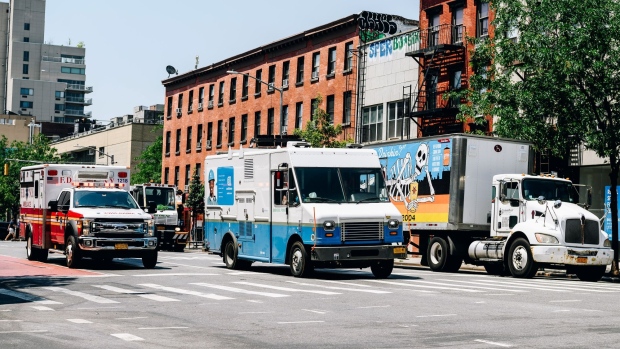 An ambulance passes a Con Edison van during a heatwave in the East Village neighborhood of New York, U.S., on Tuesday, June 29, 2021. The East Coast heat wave will be different from the Northwest's because it will reverse in coming days, with rain and a high of just 77 forecast for New York Friday. , Bloomberg

(Bloomberg) -- Consolidated Edison Inc. has hired an adviser to kick-off the sale of its renewable energy portfolio, which could be valued at as much as $4 billion, according to people familiar with the matter.

The US utility is working with Barclays Plc to help identify potential buyers for the business, the people said, asking not to be identified because the information is private. It may start a sales process in the coming weeks, one of the people said.

The business is likely to draw interest from both financial and strategic firms seeking to boost their clean-energy portfolios, according to the people. Deliberations are ongoing, and plans for the auction may be delayed or falter, they said.

Con Edison announced it was considering strategic alternatives for its clean-power business in February. The unit operates about 3 gigawatts of utility-scale renewable projects, including solar farms in Texas and California and wind farms in Nebraska, South Dakota and Montana.

Investors are piling into renewable assets amid the global shift to cleaner energy -- something that’s been exacerbated this year by Russia’s war in Ukraine. Global spending on the transition to low-carbon energy rose by more than a quarter to $755 billion in 2021, according to BloombergNEF. TotalEnergies SE agreed to buy a large stake in a closely held affiliate of renewables company Clearway Energy Inc. last month.