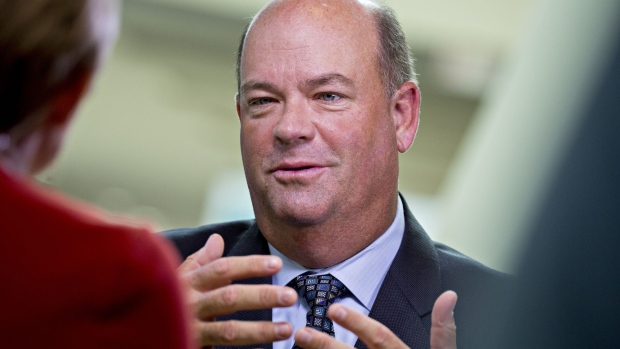 Ryan Lance, chairman and chief executive officer of ConocoPhillips Inc., speaks during a Bloomberg Television interview at the World Gas Conference in Washington, D.C., U.S, on Tuesday, June 26, 2018. The 27th World Gas Conference, themed Fueling the Future, is held every three years in the country holding the Presidency of the International Gas Union (IGU). , Bloomberg

(Bloomberg) -- In the debate over why U.S. oil producers haven’t added additional supply, the boss of ConocoPhillips lays the blame squarely with the government.

An increasingly bitter war of words has developed between the Biden administration, which has called for more production to alleviate high energy prices, and an U.S. oil and gas sector that has kept output relatively flat while criticizing White House regulatory moves.

“There’s no fast way to return supply,” ConocoPhillips Chief Executive Officer Ryan Lance said Tuesday in a Bloomberg Television interview from the World Petroleum Congress in Houston. “But if you get a stable, transparent system here in the U.S., and manage through the uncertainties, then we will invest to grow, not at the expense of returns, but there is some growth that can come out of U.S.”

President Joe Biden campaigned on a pledge to ban new fracking on federal lands, and more recently his administration has focused on clamping down on the industry’s emissions of methane, a far more potent greenhouse gas than carbon dioxide.

The House Science Committee last week requested that Houston-based ConocoPhillips and none other leading U.S. producers share data on methane leaks. Lance said that’s another example of unnecessary regulatory burden, and that in his view the industry is already making strides in self-regulating when it comes to methane.