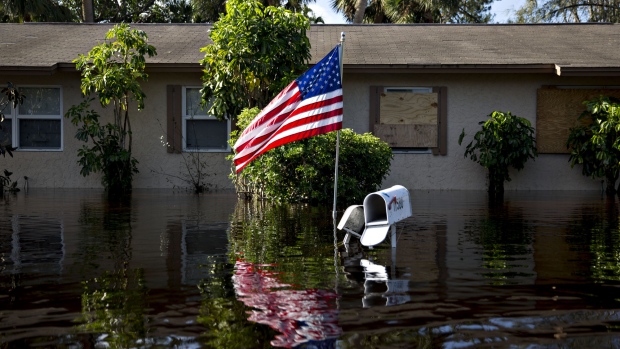 A U.S. flag flies outside a flooded home in Bonita Springs, Florida, U.S., on Tuesday, Sept. 12, 2017. Hurricane Irma smashed into Southern Florida as a Category 4 storm, driving a wall of water and violent winds ashore and marking the first time since 1964 the U.S. was hit by back-to-back major hurricanes. , Bloomberg

(Bloomberg) -- Bank of America Corp. worries flooded homeowners will default on their mortgages. The Walt Disney Co. is concerned its theme parks will get too hot for vacationers, while AT&T Inc. fears hurricanes and wildfires may knock out its cell towers.

The Coca-Cola Co. wonders if there will still be enough water to make Coke.

As the Trump administration rolls back rules meant to curb global warming, new disclosures show that the country’s largest companies are already bracing for its effects. The documents reveal how widely climate change is expected to cascade through the economy -- disrupting supply chains, disabling operations and driving away customers, but also offering new ways to make money.

The disclosures were collected by CDP, a U.K.-based nonprofit that asks companies to report their environmental impact, including the risks and opportunities they believe climate change presents for their businesses. More than 7,000 companies worldwide filed reports for 2018, including more than 1,800 from the U.S.

On Tuesday, CDP, formerly known as the Carbon Disclosure Project, released letter grades for those companies that measure “how aware they are about the issue, how they’re managing it, how they’re progressing toward targets,”said Caroline Barraclough, a CDP spokeswoman. Thirty U.S.-based companies got an “A” grade, the most of any country; they include Apple Inc., Johnson & Johnson and Home Depot Inc. Next on the list were Japan, with 25 top-scoring companies, and France with 22.

The information companies provide to CDP about their climate risk is typically far more specific than what they include in their filings to the U.S. Securities and Exchange Commission. And while the SEC requires companies to disclose material risks, it doesn’t ask them to address the specific threats associated with climate change.

Most of the largest U.S. companies by market capitalization submitted information to CDP, and the vast majority say the threat is real and serious: Of the 25 companies whose submissions were reviewed by Bloomberg, 21 said they had identified “inherent climate-related risks with the potential to have a substantial financial or strategic impact” on their business.

Many of those risks related to the effects of climate change on companies’ ability to operate. One of the most commonly cited risks was not enough water.

“Many of Intel’s operations are located in semi-arid regions and water-stressed areas, such as Israel, China and the southwestern United States,” warned Intel Corp. If climate change causes longer droughts in those areas, it could “potentially lead to increased operational costs since the semiconductor manufacturing process relies on access to water.”

More frequent hurricanes and wildfires could force AT&T to spend more money on repairing damage to its network, as well as “proactively relocating equipment or additional network hardening.” The company noted that disasters cost it $627 million in 2017.

Rising temperatures are already affecting “the comfort and health and well being of customers” in its theme parks, Disney wrote. “If measures are not taken to ensure low cost alternatives for cooling and managing extreme temperatures, this will not only negatively impact our customers experience, it will also impact our ability to attract and retain visitor numbers.”

Other companies said climate change may affect their customers. Bank of America reported that 4 percent of its U.S. real estate-secured loans are in flood zones, almost all of them residential.

“Increased flood incidence and severity could lead to our clients defaulting on their mortgage payments if, for example, flood insurance premiums become unaffordable,” the company wrote. “Clients may also find themselves in a negative equity situation due to housing values being impacted when insurance costs rise.”

Visa Inc. warns that global warming could increase global pandemics and armed conflict -- problems that would in turn cause fewer people to travel.

“Any such decline in cross-border activity could impact the number of cross-border transactions we process and our foreign currency exchange activities, and in turn reduce our revenues,’’ Visa wrote.

Intel, Visa and Google didn’t respond to requests for comment. Bank of America and AT&T declined to comment beyond what’s in those companies’ reports.

A spokesman for Coca-Cola, Max Davis, said in a statement that the company’s goal is to reduce the carbon footprint of its beverages by one-quarter between 2010 and 2020. He didn’t respond to a question about the severity of the threat that more intense droughts pose to Coca-Cola’s business.

Climate change isn’t all downside for the largest U.S. companies. Many of those that filed reports with CDP said they believe climate change can bolster demand for their products.

For one thing, more people will get sick. “As the climate changes, there will be expanded markets for products for tropical and weather related diseases including waterborne illness,” wrote Merck & Co. The company didn’t respond to a request for comment.

“As people begin to experience severe weather events with greater frequency, we expect an increasing need for confidence and preparedness in the arena of personal safety and the well-being of loved ones,’’ the company wrote. Its mobile devices “can serve as a flashlight or a siren; they can provide first aid instructions; they can act as a radio; and they can be charged for many days via car batteries or even hand cranks.’’

Living with climate change is also going to cost money, which some banks see as an opening. “Preparation for and response to climate-change induced natural disasters result in greater construction, conservation and other business activities,” Wells Fargo and Co wrote, adding that it “has the opportunity to provide financing to support these efforts.”

More disasters will mean increased sales for Home Depot, the company wrote. And as temperatures get higher, people are going to need more air conditioners. Home Depot predicted that its ceiling fans and other appliances will see “higher demand should temperatures increase over time.”

A spokeswoman for Home Depot, Christina Cornell, declined to comment beyond what was in the company’s report.

Alphabet Inc.’s Google says it expects costs and benefits from climate change. “Fluctuating socio-economic conditions due to climate change” could reduce demand for online advertising, the company reported. Yet more people might use Google Earth.

“If customers value Google Earth Engine as a tool to examine the physical changes to the Earth’s natural resources and climate, this could result in increased customer loyalty or brand value,” Google wrote. “This opportunity driver could have a positive impact on our brands.”

To contact the reporter on this story: Christopher Flavelle in Washington at cflavelle@bloomberg.net

To contact the editors responsible for this story: Jon Morgan at jmorgan97@bloomberg.net, Elizabeth Wasserman, John Harney