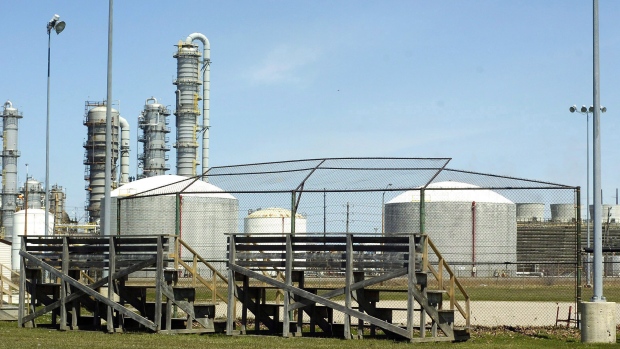 An empty baseball diamond at the Aamjiwnaang First Nation is located across the road from NOVA Chemicals in Sarnia, Ont., on April 21, 2007. , The Canadian Press

CALGARY - The Alberta Court of Appeal has ordered a recalculation of a decision that awarded US$1.4 billion in damages to Dow Chemical Canada in a dispute with Nova Chemicals Corp.

The appeal court agreed with the original judge that Dow was correct in its interpretation of an operating agreement for a jointly owned ethane cracker at the Joffre petrochemical complex in central Alberta.

The cracker, one of three at the complex, was built by Nova and Union Carbide through a 1997 joint venture agreement and designed to supply ethylene feedstock for a new polyethylene plant being built by Union Carbide.

However, Dow, a direct competitor to Nova in the Alberta ethane market, merged with Union Carbide in 2001 and took over its half ownership of the ethane cracker.

When a shortage of ethane developed, Nova split the supply between its two crackers and the one shared with Dow, a strategy that Dow argued was in violation of Nova's obligation to keep its ethane cracker running at capacity.

The appeal court found that the trial judge's inclusion of lost polyethylene profits from the lack of ethylene production was incorrect and Dow should only be compensated for direct damages, to be calculated by the trial court.