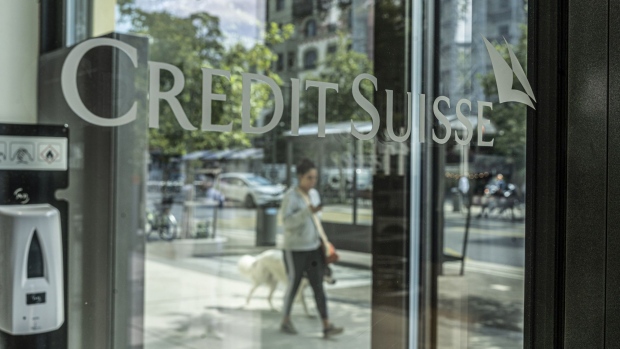 A sign on the window of a Credit Suisse Group AG bank branch in Geneva, Switzerland, on Thursday, Sept. 1, 2022. Credit Suisse is weighing cutting 4,000 jobs, a significant part of them in Zurich, as the lender overhauls its business after a series of financial and reputational hits, according to Handelsblatt. Photographer: Jose Cendon/Bloomberg , Bloomberg

(Bloomberg) -- Credit Suisse Group AG is considering plans to resurrect a “bad bank” to hold risky assets, as it seeks a turnaround from losses and scandals, the Financial Times reported, citing people familiar with the matter.

Under the proposals the investment bank could be divided into three parts, comprising of the group’s advisory business; a “bad bank” to hold high-risk assets that will be wound down; and the rest of the business, according to the publication.

“We have said we will update on progress on our comprehensive strategy review when we announce our third quarter earnings,” Credit Suisse said in a statement. “It would be premature to comment on any potential outcomes before then.”

The Swiss lender is in the middle of a broader strategic review after a string of losses under former Chief Executive Officer Thomas Gottstein. That review is set to conclude next month in a restructuring that will likely see further cuts to the investment bank and elimination of thousands of jobs.

Among other ideas, Credit Suisse is considering reviving the First Boston brand name, people familiar with the matter said earlier. It has also announced a plan to attract investors to the bank’s securitized products group.

Apollo Global Management Inc. and BNP Paribas SA are among investors showing interest in acquiring at least part of SPG business, people with knowledge of the matter said last week. The Zurich-based firm is exploring deals to sell the entire business, while potential investors may pitch to acquire specific portfolios or risk classes, the people said, asking not to be identified because the matter is private.