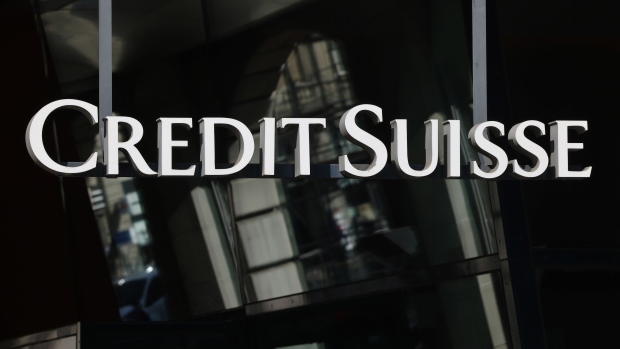 A sign for Credit Suisse Group AG in a window of the bank's headquarters in Zurich, Switzerland, on Thursday, March 24, 2022. Credit Suisse warned it may need to set aside more funds for legal costs as a result of an expected Bermuda court ruling finding it liable for potentially more than $500 million in a case involving a local insurance unit. Photographer: Stefan Wermuth/Bloomberg , Bloomberg

(Bloomberg) -- The lawyer for a Credit Suisse Group AG unit fighting a $600 million damages award over its mishandling of a former star banker turned fraudster suggested the size of the ruling exaggerates what the returns would have been if the money had been invested properly.

A Bermuda judge awarded the damages to bank client and Georgian billionaire Bidzina Ivanishvili in March after ruling that Credit Suisse Life had turned a “blind eye” to convicted fraudster Patrice Lescaudron’s misuse of Ivanishvili’s money. The sum was calculated, based on input from both sides’ accounting experts, to include assets Lescaudron misused or transferred to other clients as well as the returns the money would’ve made.

But Charles Falconer, a London lawyer leading the bank’s appeal, argued on Monday that the calculation is overly simplistic as it treats the entire portfolio as a single block and is predicated on theoretical returns during an extended bull market.

“He’s getting a second bite of the cherry” when stock market returns were “very successful,” said Falconer.

Falconer’s opening remarks during the five-day appeal are part of an effort by the bank to recover from a year of legal woes and lost investor confidence. He acknowledged the damage done during the Bermuda trial where Bermuda’s chief justice was scathing in his criticism of both CS Life’s handling of Lescaudron and its conduct during the trial.

Markus Diethelm, chief counsel at Credit Suisse since the summer, “is profoundly aware of the need to rebuild trust with the Bermudian courts,” Falconer said.

The Frenchman, who was convicted in 2018, was a lone wolf who hid his criminal activity from colleagues and supervisors, according to the bank. Regardless, Judge Narinder Hargun ruled that the bank unit bore responsibility because “CS Life knew about certain of Mr. Lescaudron’s wrongdoing, and could and should have known about his further wrongdoing.”

Credit Suisse has already provisioned for the damages, which are being held in escrow pending the outcome of the appeal.

Ivanishvili has also gone after the Swiss lender in Singapore over what the Georgian claims are $800 million in losses. Credit Suisse Trust (Singapore) Ltd. admitted during a trial in September it failed to let its billionaire client know about unauthorized transfers from his accounts, in an unexpected move that may shape the outcome of the trial.

It was the latest legal setback in what has been a difficult year for the bank which was hit with a criminal conviction for failing to prevent money laundering in June, and tens of billions in outflows of client money. Credit Suisse is appealing the conviction.

(Updates with opening day’s arguments throughout)