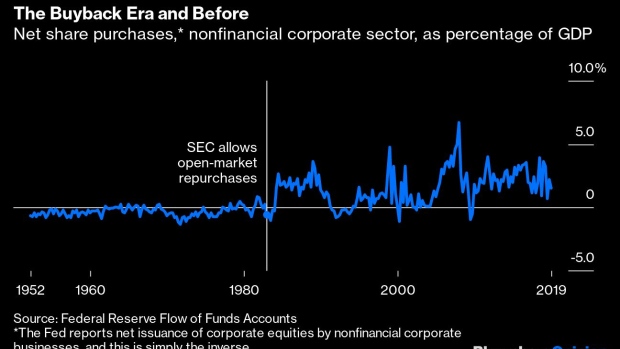 (Bloomberg Opinion) -- Corporations that receive aid from the federal government as part of the coronavirus legislation passed by Congress and signed into law by President Donald Trump last week are banned from purchasing their own shares until a year after they’ve paid taxpayers back. This isn’t quite the end to buybacks that some have called for in recent years, but it is a notable development for a practice that has since the early 1980s become a pretty major use of corporate cash.

How major? Since 2010, buybacks have consumed about half the free cash flow of the companies in the Standard & Poor’s 500 Index. For all U.S. nonfinancial corporations, they’ve averaged a little over 2% of gross domestic product during that period.

Corporations did not always spend this kind of money buying back their own shares. The next chart shows net share purchases by nonfinancial corporations, so it includes mergers and acquisitions as well as buybacks, but it gives a good indication that something major changed starting in 1984 — which happens to have been not long after the Securities and Exchange Commission altered its rules in November 1982 to make buybacks a lot easier to do.

The reason buybacks weren’t easy to do before 1982 was because of concerns that companies would use them to manipulate their share prices to nefarious end — something that has definitely happened from time to time. Most of the great market corners and other such manipulations of the 1800s and early 1900s seem to have involved buying and selling by financiers who were the controlling shareholders of corporations, not the corporations themselves. But there was at least one notable case, recounted in John Kenneth Galbraith’s “The Great Crash 1929” and a 1939 SEC report, of a corporation that bought huge quantities of its own shares in 1929, both driving up the price at the time and making those shares worth less than they would have otherwise been after the market crashed.

This was the Goldman Sachs Trading Corp., an investment company — what today would be called a closed-end mutual fund — set up by the partners of the eponymous brokerage firm and traded on the New York Curb Exchange (what later became the American Stock Exchange, now NYSE American). Its managers channeled the bulk of its cash in February and March 1929 into buying back shares, helping drive the price from $136.50 to $222.50 over the course of a few weeks. As the market began to slide in September, they engaged in another buying frenzy, accounting for 64% of trading volume in the stock that month, but could not halt its decline. Three years later, the shares were selling for $1.75 apiece.

The SEC was created in 1934 to police such behavior, which it did in subsequent decades. One key case involved lumber products maker Georgia-Pacific. As finance scholars Douglas O. Cook, Laurie Krigman and J. Chris Leach described in a 2003 paper:

Between 1961 and 1966, Georgia-Pacific acquired other companies using its common stock as payment. The number of shares to be exchanged in these transactions was contingent on the price level reached during a specified trading period. The SEC charged that Georgia-Pacific had used open market repurchases to manipulate (increase) the reference sale price, thereby reducing the number of shares needed to effect the acquisitions.

The SEC won in court, and in 1968 Congress updated the Securities and Exchange Act to make it explicit that buybacks were illegal if “fraudulent, deceptive, or manipulative,” leaving it up to the SEC to define what that meant. The commission came up with its first set of proposed rules for buybacks in 1967, before the legislation was passed, and revised them several times over the next decade. In an Oct, 27, 1980, rule-making proposal that was meant to clear up uncertainties, the SEC described four main reasons buybacks might be deemed out-of-bounds:

Eight days later, Ronald Reagan was elected president, and two years later the new majority he appointed to the SEC, led by Chairman John Shad, a former head of investment banking at E.F. Hutton, swept all this aside. The commission instead granted “safe harbor” from liability for most repurchases, arguing that “issuer repurchase programs are seldom undertaken with improper intent” and “may frequently be of substantial economic benefit to investors.” The new rule still contained limitations on buybacks — the safe harbor disappeared during mergers, for example, and you couldn’t do any buybacks during the last half-hour of a trading day — but the disclosure requirements were so lax that it would be hard to tell if a company were violating them (these were beefed up somewhat in 2003). Buybacks had been unleashed.

They were also starting to become fashionable, thanks to an electrical-engineer-turned-corporate-executive named Henry Singleton. During the stock market go-go years of the 1960s, Singleton had built a small electronics company into a sprawling but well-managed conglomerate. Stock in his Teledyne Corp. seemed to him to be priced quite richly relative to his preferred metric of profit, free cash flow, so he kept issuing more and more of it to buy other companies — 130 of them from 1961 to 1969.(1) When the stock market slumped after that, and the conglomerate Singleton had assembled kept churning out cash, he decided to stop issuing stock and start retiring it. “I think we can earn a better return buying our shares at these levels than by doing almost anything else,” he told one of Teledyne’s board members, the venture capitalist Arthur Rock, in 1972. “I’d like to announce a tender — what do you think?”

A tender is a public offer to buy a certain amount of shares at a set price, a transaction transparent enough to avoid any SEC suspicions of market manipulation. Rock and the rest of the board agreed to Singleton’s plan, and “between 1972 and 1984, in eight separate tender offers, he bought back an astonishing 90 percent of Teledyne’s outstanding shares,” wrote private equity investor Will Thorndike in “The Outsiders,” the 2012 book from which my account of Singleton here is taken. “Singleton bought extremely well, generating an incredible 42 percent compound annual return for Teledyne’s shareholders across the tenders.”

Those who sold in the tender offers didn’t share in those returns, of course, but they did get cash, on which they paid tax at capital-gains rates rather than the higher tax rates to which dividends — traditionally the chief means of conveying excess corporate cash to shareholders — were subjected. Other financially savvy corporate managers began to follow Teledyne’s example, with Warren Buffett endorsing buybacks in his 1978 Berkshire Hathaway shareholder letter as “often by far the most attractive option for capital utilization.” By 1985, Buffett’s friend and bridge partner Carol Loomis was reporting in Fortune that corporations that voluntarily bought significant amounts of their own common stock from 1974 through 1983 had as a group outperformed the Standard & Poor’s 500 Index by 8.5 percentage points a year. And buying back shares had, thanks to the SEC, just become a lot easier to do.

In the 1980s, a lot of the net share purchases apparent in the above chart were due to leveraged buyouts and mergers that removed shares from circulation. Others were opportunistic buybacks of the sort pioneered by Singleton, with repurchases spiking in the months after the 1987 stock market crash as executives bet correctly that markets would recover. In the 1990s, though, buybacks began to be something that companies just did, year in, year out. Their apparent success as a means of delivering higher shareholder returns — several studies in the 1990s backed up Loomis’s early findings — was one reason, but in her 1995 Massachusetts Institute of Technology doctoral dissertation, economist Christine Jolls proposed another. As she wrote in a subsequent paper:

Companies were giving out more and more stock options to their executives as compensation, and using buybacks to keep those grants from inflating shares outstanding, which would dilute earnings per share and thus presumably put downward pressure on stock prices. It wasn’t exactly what the SEC had in mind back in 1980 when it said buybacks were fraudulent if used to “assist insiders in disposing of their holdings,” but it was kinda-sorta in the ballpark. In recent years, corporate insiders have been twice as likely to sell stock in the eight days after their company announces a buyback as at other times, SEC Commissioner Robert Jackson reported in 2018. That sure seems like a hint that companies are often buying back shares for reasons other than that management truly believes it is “the most attractive option for capital utilization.”

In keeping with this impression, some recent studies show the shareholder-return advantage once enjoyed by buyback companies to have largely evaporated. This is partly just because buybacks are so widespread that it would be really hard for buyback companies to beat the average, given that they now more or less are the average. There is some evidence, though, that a predilection for buybacks may now foreshadow trouble ahead. Buybacks go hand in hand with decreased capital investment (although there are questions about the direction of causation), while the banks that spent the most on buybacks in the run-up to the 2008 financial crisis were the most likely to need bailouts during it. Plus, the simple fact that buybacks hit their all-time high as a share of GDP in mid-2007, right as things began to unravel, is pretty damning on its own. I’m still not quite ready to buy into University of Massachusetts at Lowell economist William Lazonick’s increasingly influential argument that buybacks, and the SEC’s 1982 rule change in particular, are responsible for pretty much everything bad that’s happened to the U.S. economy since.(2) But I can’t entirely dismiss it either.

The role of buybacks in the coronavirus-induced crisis does seem somewhat secondary. Yes, it looks terrible that the five biggest U.S. airlines spent 96% of their free cash flow on buybacks from 2010 through 2019, as Bloomberg’s Brandon Kochkodin reported in March. Buybacks didn’t cause the pandemic, though, and I’m not sure we really ought to expect corporations to have balance sheets that can withstand the consequences of having their industry virtually shut down worldwide for months. Banning buybacks until government aid is repaid does make sense, as does banning common-stock dividends for that period — which the legislation also does. That doesn’t mean either should be banned forever, although I guess it does indicate that one or the other conceivably could be.

A simple three-page bill introduced by Wisconsin U.S. Senator Tammy Baldwin and several other Democratic lawmakers in 2018 and 2019 would ban open-market repurchases, while still allowing the tender offers that made Teledyne great. There are legitimate reasons to do open-market buybacks, though, so I wonder whether a better if messier approach might be something like what Congress did in 1968, charging the SEC with redefining what constitutes a “fraudulent, deceptive, or manipulative” buyback in the context of stock-based executive-compensation programs. The reasoning offered by Shad’s SEC for mostly abandoning this effort in 1982 — that buybacks are “seldom undertaken with improper intent” — seems in retrospect either spectacularly naive or spectacularly cynical.

(2) Disclosures (or maybe it's just name-dropping): I was tangentially involved in the editing of the Harvard Business Review article by Lazonick that is linked to here, as well as that of Thorndike's book, which was published by the Harvard Business Review Press. Carol Loomis was a colleague of mine at Fortune, and I know Christine Jolls because our kids were middle-school classmates. Also, in the late 1990s, I pocketed a modest Time Warner employee-stock-options windfall that may have been enabled in part by buybacks.