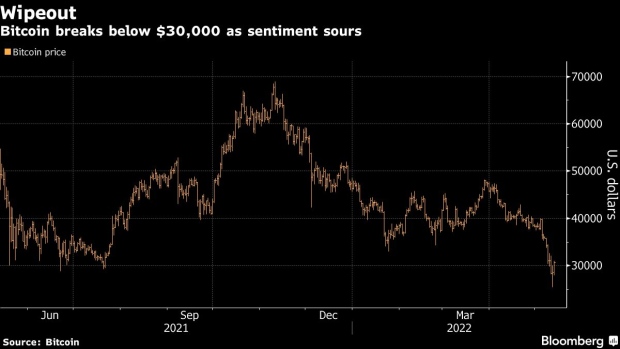 (Bloomberg) -- A staggering year of losses for investors of exchange-traded products tracking digital assets has done little to shake their confidence in the market, despite recent turbulence.

ETPs globally tracking everything from Bitcoin to Polkadot are still drawing in cash this year through Thursday, even as their average return over the same period hit minus 45%, according to data compiled by Bloomberg.

Investors continued to pile into such funds over the past week, adding about $106 million even as crypto assets lost some $270 billion of their market value.

Some flow data is delayed because of settlement schedules, so it’s possible that an exodus in the past day or two don’t show up yet. But given the durability and timing of the flows, it’s more likely that investors are trying to position themselves for the next bounce, according to Bloomberg Intelligence.

“This is bottom-calling. People have probably been waiting for a time to get into Bitcoin, and why not while it’s under $30,000?” said James Seyffart, a Bloomberg Intelligence ETF analyst. “There were a bunch of outflows in April for crypto funds around the world. But that started to change so far in May, with money coming in.”

Bitcoin, the world’s largest cryptocurrency, has plummeted more than 33% so far in 2022 as the Federal Reserve tightens monetary policy, zapping the speculative fervor that defined markets over the past two years. It briefly plunged below $26,000 this week -- a far cry from November’s record high of nearly $69,000. The implosion of the algorithmic stablecoin TerraUSD further dragged down sentiment this week, prompting the likes of Treasury Secretary Janet Yellen to renew calls for regulation.

But amid the drawdown, memories of crypto’s explosive gains still linger. Bitcoin had surged over 300% in 2020, followed by last year’s nearly 60%. Ether, the second largest cryptocurrency, was up far more. Against that backdrop, the current wipeout looks like a lucrative opportunity to some investors.

“People are always opportunistically adding to their exposure,” Meltem Demirors, chief strategy officer at crypto fund provider CoinShares, said in a Bloomberg Quicktake interview this week. “I think there’s many investors who haven’t put on a position in the past or had a smaller position who are looking to scale into a larger position.”