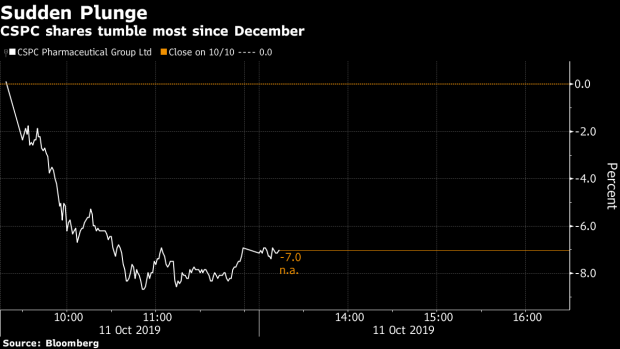 (Bloomberg) -- CSPC Pharmaceutical Group Ltd.’s shares slumped the most this year on speculation that a component of the Chinese drugmaker’s key product has been put on a government watch list.

The possible inclusion of the substance, butylphthalide, on the watch list in China’s eastern Zhejiang province would mean the local government would closely monitor its usage.

The move, if true, could hurt the company’s sales as one of its key drugs is made using the substance, according to a trader who had viewed a copy of the list posted online. He asked not to be named as he isn’t authorized to speak to public on the matter. The list is not available through official channels.

“Most have always thought that this drug would be spared,” said Wang Daixin, a fund manager at Bristlecon Pine Asset Management Ltd, adding that the product accounts for a fifth of the company’s revenue. “It’s CSPC’s first innovative drug and the one it built up its empire on.”

Chinese drug stocks have been volatile much of the past year amid government actions. The national government has been moving to centralize drug procurement in the hopes of substantially lowering purchase costs, while also curtailing the use of medicines with unclear efficacy.

CSPC’s stock fell as much as 8.9% in Hong Kong on Friday, the biggest intraday decline since Dec. 14, after touching a high for the year earlier in the week. CSPC peer Sino Biopharmaceutical Ltd. dropped as much as 4.2%.

A CSPC spokesman wasn’t immediately available to comment, while a worker at Zhejiang’s government health department declined to verify the speculation.

Butylphthalide is used in China as a stroke treatment, though there is no scientific evidence to its efficacy, according to an article in the American Journal of Chinese Medicine.

--With assistance from April Ma, Jinshan Hong and Jeanny Yu.

To contact the reporter on this story: Kevin Kingsbury in Hong Kong at kkingsbury2@bloomberg.net

To contact the editors responsible for this story: David Watkins at dwatkins19@bloomberg.net, Jeff Sutherland, Magdalene Fung