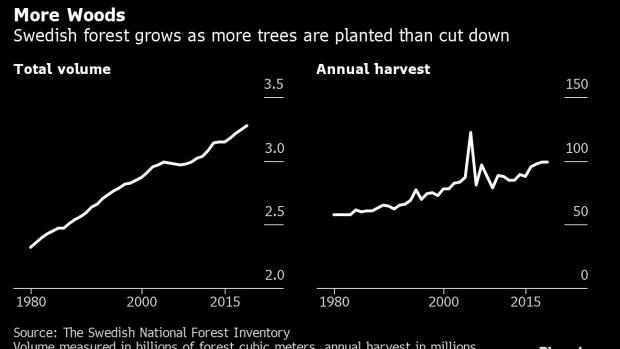 (Bloomberg) -- Sweden’s forest industry has prepared a defense against critics who say trees should be left in the forest to bind carbon and help fight climate change.

At the heart of the conflict is the European Union’s need to regulate sustainable activities across the bloc, where forest-based carbon sinks are on average declining, in net terms. That has prompted concerns that forestry accumulates a so-called carbon debt because trees take several decades to grow back.

In densely forested Sweden, the industry is keen to show trees are, overall, sequestering more carbon dioxide than is released. The companies, who make their profit from pulp, packaging and timber, commissioned a study that shows a bigger climate benefit from cutting trees than reducing or halting harvests.

The math in the report published on Tuesday centers on displacement effects: fossils can be left underground if wood is used to replace such materials, resulting in smaller carbon dioxide emissions than keeping forests intact but using materials such as plastic instead.

The industry argues that a carbon-debt calculation is nonsensical in a forest that is managed in a sustainable manner, such as in Sweden, where trees are replanted, increasing both standing volume and wood supply. That’s in contrast to clearing rainforests for palm-oil plantations, resulting in deforestation and the loss of biomass, they say.

“If you leave a tree for long enough, it will die and release the carbon into the atmosphere again. Over time, it’s a zero-sum game,” said Henrik Sjolund, chief executive officer of Holmen AB, a Swedish timber producer. “What’s best for the climate is to harvest as much as possible without reducing the carbon sink in the standing forest, and to replace fossil materials such as concrete, steel, plastics and fossil fuels with bio products.”

“It takes time for trees to grow back, and the soil to accumulate carbon again,” she said in an emailed response to questions before the industry’s study was published. Forestry “decreases the total amount of carbon stored in the land ecosystems,” she added.

The industry’s strife with the EU began in February, when the bloc’s climate chief, Frans Timmermans, said the state of Sweden’s forests was worsening. Sweden needs to adapt its forestry to rising temperatures and increase biodiversity to boost resilience, he said.

Another climate controversy involving forests concerns the use of biomass to produce renewable energy. Non-governmental organizations have accused the European Commission of watering down its proposed Taxonomy of Sustainable Activities, calling on it to remove forest biomass as a combustible raw material from the Renewable Energy Directive.

Yet in the Nordic region, the industry argues it only uses scraps and leftovers for power. Wood is so expensive and grows so slowly compared with tropical areas that it’s unprofitable to use timber for energy, companies say.

“It makes no sense to grow trees only to produce bioenergy,” Sjolund said. “Why would anyone do that? We grow trees to build houses and homes out of the logs, that’s the logical business model for a Swedish forest owner to earn money.”