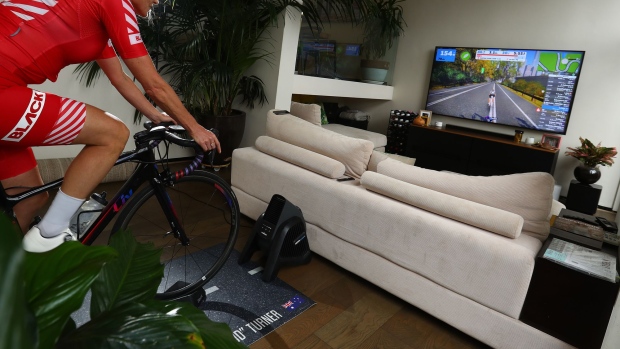 (Bloomberg) -- Zwift, a startup that hosts virtual-reality cycle races, has raised $450 million from investors including private equity firm KKR & Co. in a funding round that will allow it to introduce its own indoor bike and other hardware.

The investment values the London and Long Beach, California-based company at more than $1 billion, two people familiar with the matter said, asking not to be identified because the terms are private. Zwift will also use the cash to build out its core software platform and increase headcount, the company said in a statement Wednesday. A spokesperson for the company declined to comment on its valuation.

Companies like Zwift and larger rival Peloton Interactive Inc. are benefiting from a boom in at-home workouts as the coronavirus pandemic shut gyms and forced more people inside. Zwift’s technology lets riders simulate outdoor training -- such as cycling up a mountain -- from their living room. Riders can train or compete against one another by wirelessly connecting a bike trainer or treadmill to the Zwift app.

High-end bike maker Specialized Bicycle Components Inc. also invested through its venture arm calling it “the beginning of a strategic partnership” and Ilkka Paananen, chief executive officer of game maker Supercell, is joining Zwift’s board, the company said in the statement.

While there is the opportunity for acquisitions, Zwift, founded by former JPMorgan Chase & Co. investment banker Eric Min, is primarily focused on creating more user experiences, said Stephen Shanley, a director at KKR, in an interview.

“Zwift has the optionality to make a compelling public market company,” Shanley said. “But it could also be attractive for a strategic buyer,” he said.

Permira, Zone 5 Ventures and existing investors, including London-based investment firm True and Highland Europe, also participated in the round, which brings the startup’s total investment to date to about $620 million.

KKR is making the investment through its growth fund, which raised $2.2 billion in January. KKR has made growth investments including British cybersecurity firm Darktrace and German online travel marketplace GetYourGuide.