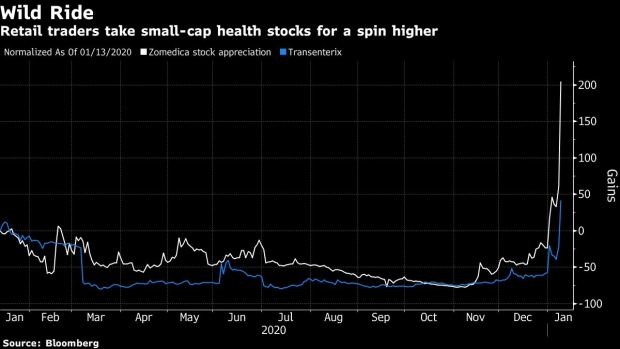 (Bloomberg) -- TransEnterix Inc. almost doubled, climbing as much as 97% on Monday, as day traders drove heady gains in a handful of health-care stocks.

The stock has surged about 180% since the start of the new year. Today’s trading volume was more than 13 times normal. The penny stock garnered a mention in several Reddit forums over the past few days, with one user comparing it with the roughly $95 billion market-cap leader in surgical robotics, Intuitive Surgical Inc.

TransEnterix markets the Senhance surgical system, cleared by the U.S. Food and Drug Administration in 2017. According to the device-maker in an update last week, 10 of the systems were installed in 2020. The Morrisville, North Carolina-based company said it ended 2020 with $17.5 million in cash and equivalents, enough to keep the company afloat into the third quarter.

Such outsized moves in small-caps are becoming par for the course these days. Also surging at the open on the back of mentions in Reddit forums was Zomedica Corp., a company that develops medicines for pets. The stock jumped as much as 98% on Monday and is up almost four-fold from the start or the year. Signal Advance Inc., another medical device-maker, soared as much 885% to a record high Monday after investors confused its ticker with another company mentioned in a tweet by Elon Musk. The stock pared gains, though was still up about 300% by midmorning.