Building back Calgary as the best possible business environment: Alberta Minister of Jobs

Calgary, the center of Canada’s oil and gas industry, has lost senior investment bankers from Morgan Stanley, Barclays Plc and Citigroup Inc., a signal of banks’ new approach to the energy sector and declining deal flow.

The departures reflect a variety of forces, including a shrinking pool of major oil producers in the city and global banks’ heightened focus on renewable energy, as well as their own environmental metrics. Canadian banks have been more willing to provide credit to the country’s energy firms than their international rivals, and are therefore winning other business too, said Adam Dean, president of Dean Executive Search in Toronto.

“If they decide to deploy credit, they get the ancillary business like the M&A transaction advisory fees much more easily,” Dean, whose firm specializes in finding candidates for financial jobs, said in an interview. “So it became a bit of a tale of two cities, between the U.S. and global firms operating in Calgary versus the Canadians.” 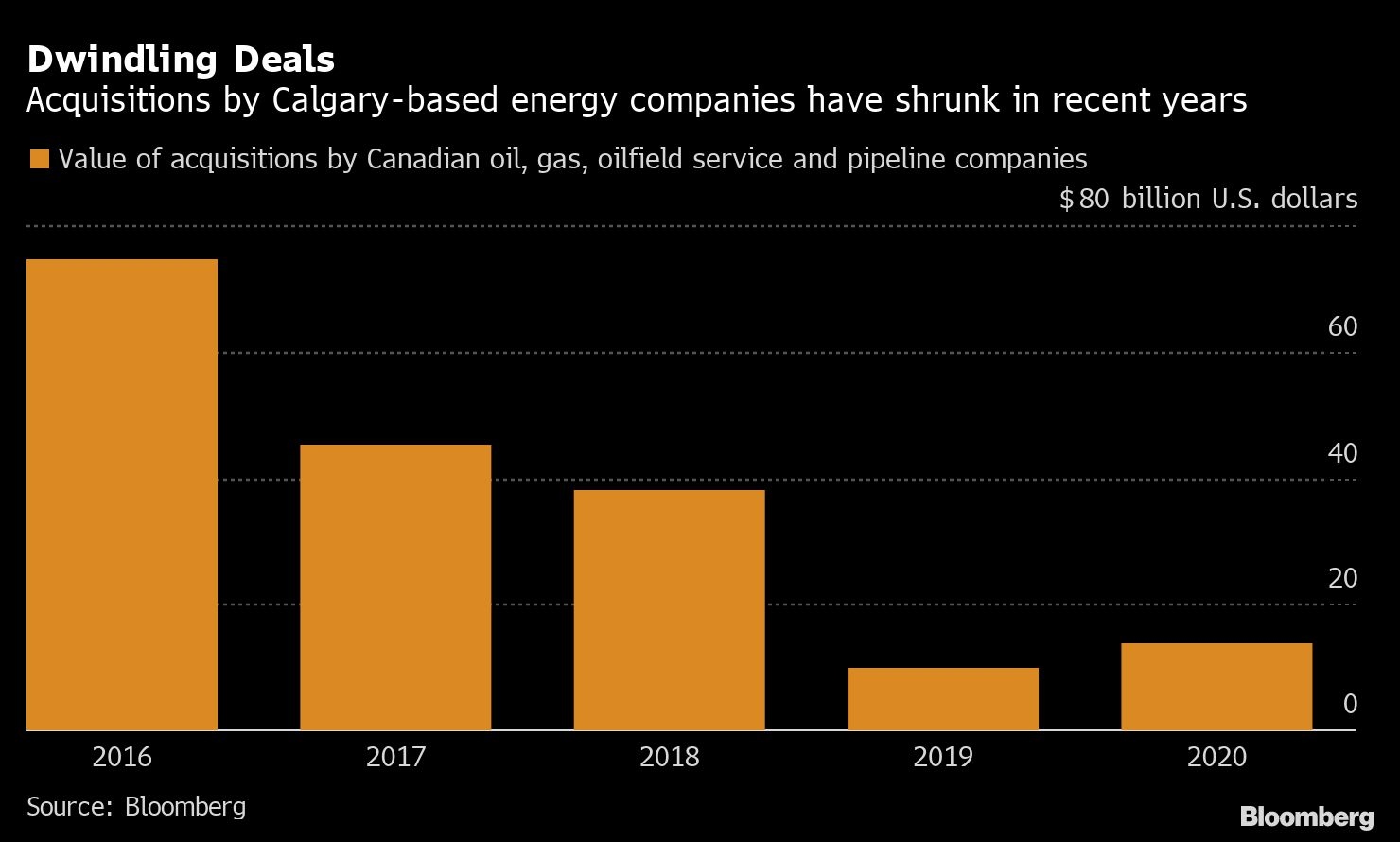 Greg Saksida, hired by Citigroup from Toronto-Dominion Bank in January 2019, left the firm earlier this year and his role isn’t being directly replaced, according to a person familiar with the situation.

Morgan Stanley closed its Calgary investment banking office this year, and Denis Rajotte, who led that office, is no longer with the bank, according to people familiar with the matter.

Dan Blitt, who worked for Barclays’s investment banking operations in Calgary for almost 14 years, left in January and started in a new job at TC Energy Corp. in May, according to his LinkedIn page. The bank isn’t backfilling Blitt’s role with another senior banker, though it continues to hire junior bankers in Calgary, according to a person familiar with the matter.

Representatives for Citigroup, Morgan Stanley and Barclays declined to comment.

Equity sales, a key driver of underwriting fees in the oil patch, have slowed to a trickle in Calgary. The value of primary and secondary share offerings from Canada’s oil and gas, oilfield-service and pipeline companies shrank to US$486.1 million last year, about 2.6 per cent of the volume from 2016, according to data compiled by Bloomberg.

Perhaps more importantly, those companies were buyers in US$13.7 billion of deals announced last year, less than one-fifth of the US$74.5 billion in deals announced in 2016.

“M&A is the biggest driver,” said Lara Zink, president and chief executive officer of Women in Capital Markets in Toronto. “If you don’t have a view to any of the big Canadian energy companies looking to do M&A in the U.S. or globally, there really isn’t a lot of incentive to keep people on the ground.”

The deal pace has rebounded so far this year, with Canada’s oil and gas-related companies involved as buyers in US$21.5 billion of announced deals, highlighted by Pembina Pipeline Corp.’s battle with Brookfield Infrastructure Partners LP to take over of Inter Pipeline Ltd.

Domestic banks like Bank of Montreal and Canadian Imperial Bank of Commerce are also changing their approach to the energy industry. BMO last year wound down its U.S. oil and gas investment banking business to focus on Canada. The bank earlier this month said it’s forming an energy-transition group in its capital markets business that will draw on sector specialists from its energy, power utilities and infrastructure and industrials groups, among others.

CIBC in April said its oil and gas investment banking team was among those being folded into a new global energy, infrastructure and transition group.

European banks have faced even more pressure on environmental issues. Barclays has faced shareholder votes for the past two years over winding down its lending to fossil fuel companies, for instance.

“The business of investment banking in the energy space more broadly is moving toward energy transition,” Dean said. “The U.S. firms and the global firms are moving away from the traditional E&P advisory business.”

However, Calgary has been through booms and busts before, and global banks’ interest and presence in the region has ebbed and flowed over the years, Zink said.

“It’s a highly cyclical business, and the U.S. banks have frequently entered and re-entered the market over several decades,” Zink said. “Many of the U.S. banks feel like they can service Calgary out of New York or Houston, but they flip-flop in terms of whether they have bankers on the ground.”