This downturn is not like the 2000s: Legendary investor's outlook for big tech

Dell Technologies Inc. fell the most since the company returned to the public markets in December 2018 after executives’ pessimistic remarks about the business environment for the second half of the year outweighed solid quarterly results.

In a conference call Thursday, Chief Financial Officer Tom Sweet said revenue in the current quarter will be US$23.8 billion to US$25 billion -- a sales decline of about 8 per cent from a year ago at the midpoint of the estimate. Analysts, on average, projected US$26.4 billion.

Still, Dell said its long-term financial models project annual revenue growth of 3 per cent to 4 per cent and an increase of more than 6 per cent in earnings per share. For the full year, Sweet said revenue should range from flat to 2 per cent growth.

The long-range forecast wasn’t enough to overcome investors disappointment with the current outlook. The shares declined 14 per cent to US$41.43 at the close Friday in New York, the biggest one-day drop on record, which fueled a fall of 26 per cent this year.

Sales climbed 9 per cent to US$26.4 billion in the fiscal second quarter, which ended July 29, in line with estimates. Earnings, excluding some items, were US$1.68 share, the Round Rock, Texas-based company said Thursday in a statement. Analysts, on average, projected US$1.64, according to data compiled by Bloomberg.

While personal computer sales make up about 60 per cent of Dell’s revenue, the company overcame a downturn in consumer spending with gains among its business clients. Commercial PC sales grew 15 per cent to US$12.1 billion while consumer sales dropped 9 per cent to US$3.3 billion. 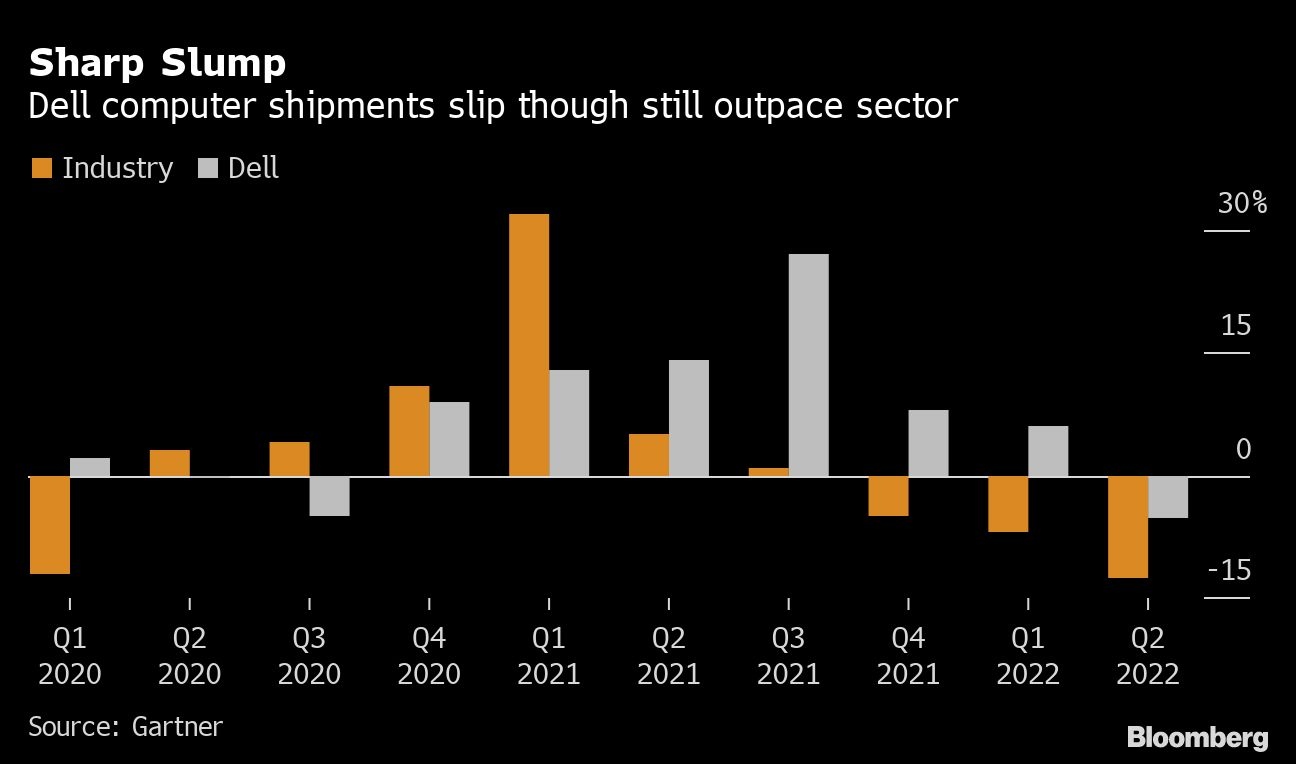 Global PC shipments fell 13 per cent in the three months from April to June -- the worst quarter in more than nine years, according to Gartner Inc., an industry analyst. Much of the decline was due to the ongoing downturn in demand for Chromebooks and inflation-squeezed budgets delaying consumer purchases.

Fiscal second-quarter revenue from the Infrastructure Solutions Group, which includes most of Dell’s technology services, increased 12 per cent to US$9.5 billion from a year earlier. Server and networking sales climbed 16 per cent to US$5.2 billion, while storage revenue gained 6 per cent to US$4.2 billion.

Investors may have been expecting Dell’s infrastructure unit to beat estimates, and share gains heading into the results left little room for a rally, said Woo Jin Ho, an analyst at Bloomberg Intelligence.

“We’re somewhat surprised by (Dell’s) more-muted ISG view, given sturdier results from enterprise IT peers,” he said in a note. “Dell notes elongated purchasing decisions and smaller orders and could be a test case for broader weakness.”

To emphasize the continuing slump in the PC market, Sweet said current-quarter sales in Dell’s PC division are expected to decline by a “high teens” percentage from the period a year ago. Revenue will increase “in the low teens” in the infrastructure unit, where executives “see a more challenging” demand environment, he said.

Supply chain backlogs improved during the quarter for Dell, and backlog-clearing PC sales helped offset demand weakness, Clarke said. However, the backlog for its infrastructure unit, particularly for server components, remained elevated, and component cost inflation is expected in the third quarter, he said.

Gross margins decreased 2 percentage points from a year ago to 21.4 per cent, mainly due to expense increases and currency value changes that haven’t yet been factored into product prices, Sweet said. The company slowed down external hiring as part of an effort to control costs, Sweet said.

Dell ended the quarter with remaining performance obligations of US$41 billion, up 2 per cent year-over-year. Recurring revenue was US$5.2 billion, a gain of 8 per cent from the period a year earlier. The company said annual recurring revenue for APEX, its cloud management service, is now more than US$1 billion.