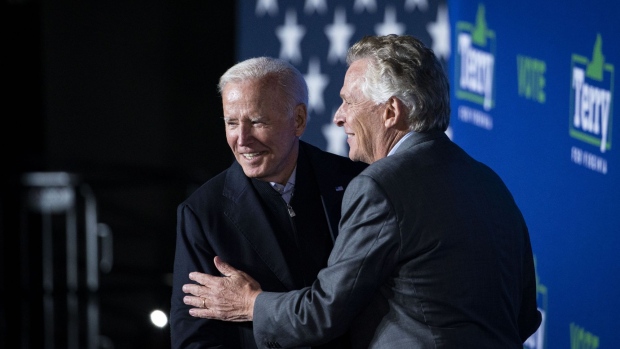 Signs point to Democrats holding a lead in early votes cast. McAuliffe is a former Virginia governor and former chair of the Democratic National Committee. Youngkin, a former co-chief executive officer of the Carlyle Group Inc., is also encouraging supporters to vote early, even though Republicans are more apt to wait until Election Day to vote.

Youngkin doesn’t expect to match McAuliffe’s early voter turnout numbers, but if he can get enough of those votes to stay within striking distance, then Election Day turnout may be enough for him to win. His campaign claims he already has.

McAuliffe, at the same time, is trying to get as many early votes as possible by holding campaign rallies alongside his party’s biggest names, including President Joe Biden on Tuesday night, to generate turnout.

Both candidates need to scrounge for early votes. A USA TODAY/Suffolk University Poll released Tuesday showed the race deadlocked at 45% each with 5% of likely voters still undecided in a state Biden carried by 10 points. The more votes that McAuliffe or Youngkin can bank ahead of the Nov. 2 election decreases the chances that someone undecided, but leaning in their respective directions, pivots the other way on Election Day.

Virginia expanded early voting during the coronavirus pandemic and earlier this year passed a law to allow voting on Saturdays and Sundays. Both parties are looking for clues of how to get more votes cast as they eye next year’s congressional midterm elections.

As of Tuesday morning, 724,965 ballots have been cast in the state, more than three times the number of early votes cast in the 2017 gubernatorial election, with heavily Democratic areas like Richmond and Charlottesville leading the way.

Virginia does not have party registration, so it’s not known exactly how the early votes are breaking down. While the majority of the early votes are cast in Democratic enclaves of the commonwealth, it’s unclear how many of those might be crossover votes.

Using commercial and government sources, the Democratic data firm TargetSmart estimated that 55% of the early vote has been cast by Democrats, 30% by Republicans and 15% by independents.

The Youngkin campaign concedes that McAuliffe is doing better on early voting, but they add he’s not doing well enough. Senior data adviser Kristin Davison said that only around 400 people voted after one recent McAuliffe event, far fewer than she had expected.

She said the Youngkin campaign projected it would have to win 35% of the early vote to remain competitive with McAuliffe heading into Election Day, which she said the campaign has already exceeded, according to its own model of the electorate.

“We don’t anticipate to overwhelmingly win the early vote, and that’s O.K.,” she said. “We don’t have to.”

Youngkin is trying to get Republicans to vote early even as Donald Trump discourages the practice. The former president continues to falsely claim that there was widespread fraud in last year’s presidential election, threatening that “Republicans will not be voting” in the mid-term or next presidential election if the party doesn’t focus on that unfounded claim.

Youngkin has been holding rallies outside polling places, as well as taking a 10-day cross-state bus tour in the final days of the campaign and a rally with country singer John Rich. He’s also using text messages and door-knocking efforts to help ensure that supporters know how to vote early.

Republican strategists blame Trump’s falsehoods about the 2020 election for dampening turnout in two Senate elections in Georgia in January that the party lost.

But Davison said the campaign has overcome concerns about election security by sending poll watchers to early voting sites and setting up a hotline where voters can report problems. As a result, an issue with a voting machine in Fairfax County was resolved as well as a situation where voters in one district were sent the wrong ballots by mistake, she said.

The McAuliffe campaign has tried to glue Youngkin to Trump in an effort to increase Democratic turnout.

“Voters know that if they don’t turn out, there is no way for their candidates to win,” GOP strategist Jimmy Keady said. “Even if some are concerned about the possibility of fraud, they understand that giving their candidates a chance to win is better than having no chance at all.”

John Couvillon, another Republican strategist, said that while the number of early votes might be higher than in the 2017 election, it is still lower than he would have expected when looking at the extremely high rate of early voting in 2020, even accounting for a typical dropoff in interest, so Youngkin has a chance to gain ground.

McAuliffe’s campaign isn’t conceding any advantages to Youngkin on Nov. 2 turnout, saying that this year’s primary showed that many Democrats who had voted early for the first time during the pandemic returned to voting on Election Day.

“Virginians are going back to what they know how to do, and that is vote for Democrats on Election Day,” said Simon Vance, a senior data adviser to the McAuliffe campaign.

He said they also expect to have an advantage on the 152,000 mail ballots that were requested but not yet returned.

His campaign held a get-out-the-vote rally last Sunday that featured Abrams, Democratic National Committee Chair Jaime Harrison and musician Dave Matthews in Charlottesville. Biden rejoined McAuliffe on Tuesday in the Washington suburb of Arlington. They campaigned there together in July as well.

In the final stretch of the election, McAuliffe plans to appear again with Harris. He has events Wednesday with Senators Cory Booker of New Jersey and Alex Padilla of California, both Democrats.

McAuliffe’s intention to intensify turnout among the Democratic base, particularly among Black voters coupled with Republican skepticism of early voting may help him eke out a win, said Bob Holsworth, a veteran Virginia political analyst.

“If he wins this race by a comfortable margin, this will be a model for Democrats across the country,” he said.