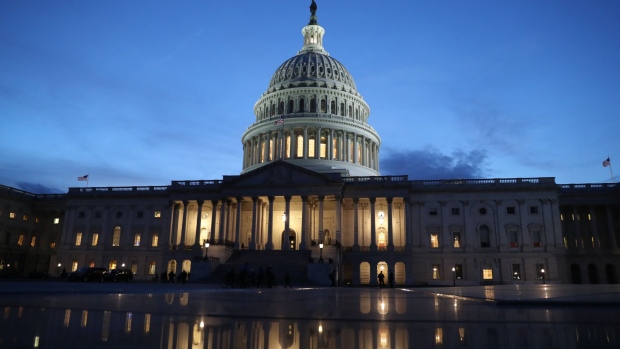 The U.S. Capitol stands at sunset in Washington, D.C., U.S., on Tuesday, Feb. 5, 2019. President Donald Trump will speak to a House chamber full of Democrats jostling to challenge his re-election on Tuesday night, with many female lawmakers planning to dress in suffragette white and his chief antagonist Nancy Pelosi seated at the dais behind him. Photographer: Al Drago/Bloomberg , Bloomberg

Democratic lawmakers, with President Joe Biden’s support, are drawing up details of a plan to tax billionaires and other ultra-high earners after Senator Kyrsten Sinema’s opposition to raising the rate on corporations sank a key funding component for a multitrillion-dollar social-spending package.

Senate Finance Committee Chair Ron Wyden, an Oregon Democrat, plans next week to unveil a new tax on the unrealized capital gains of the ultra wealthy, according to his office. The proposal, which has support from other Democratic lawmakers, would set the so-called billionaires’ income tax at US$1 billion in assets, or three consecutive years of US$100 million or more in income - hitting some 700 taxpayers.

The tax would apply to a wide variety of items like stocks, bonds, real estate, and art, with gains in value taxed on an annual basis, regardless of whether or not the asset is sold. Annual decreases in value could also be deducted, according to a version of the proposal, which dates to 2019.

Wyden has pushed the plan as part of a longstanding effort to tax capital similar to the way income is taxed. Sinema’s opposition to corporate and individual tax-rate increases might give the unorthodox tax increased leverage in the drafting process, because it could raise significant amounts of revenue for the social-spending package Democrats want to advance without her needing to change her position.

Biden has signaled support for Wyden’s idea, though the complex new tax regime has yet to receive full vetting among Senate Democrats. It also has support from progressive senators Elizabeth Warren of Massachusetts - who for years has promoted a wealth tax - and Ohio’s Sherrod Brown, members of Wyden’s tax policy committee.

“If you don’t want to pay any taxes in America, what you do is you buy, you borrow, and you die,” Wyden said earlier this month. “Those three things get out of paying taxes and nurses and firefighters pay taxes every year, and under my plan, billionaires will, too.”

Some of the plan’s details were reported earlier by the Washington Post.

Biden acknowledged Thursday that he doesn’t have sufficient Senate Democratic backing for his proposed increase in the U.S. corporate tax rate giving fresh impetus to efforts by negotiators to find alternative revenue sources for their sweeping social-spending bill. Nearly all of the options, including the billionaires’ tax, are more complicated and politically risky than just increasing the top-line rate.

Biden had sought to boost the 21 per cent corporate tax rate, which had been lowered to that level in President Donald Trump’s signature tax overhaul. But at a CNN town hall on Thursday night Biden said, “I don’t think we’re going to be able to get the vote,” speaking in response to a question.

Sinema’s press secretary, Hannah Hurley, said Friday that the senator, an Arizona Democrat, would “continue to work directly in good faith with the White House, Senate leadership, and her colleagues to expand economic opportunity while growing American economic competitiveness.”

“She has told her colleagues and the president that simply raising tax rates will not in any way address the challenge of tax avoidance or improve economic competitiveness,” Hurley added.

The new tax is among several ideas Wyden has pushed as his “menu of options” to pay for the social spending package, many of which are tax changes that may not violate Sinema’s opposition to increasing taxes on corporations and individuals earning more than US$400,000, as the White House and other Democrats want to do. But Democrats still must hash out which so-called revenue raisers they agree on.

Wyden’s counterpart in the House of Representatives, Ways and Means Committee Chairman Richard Neal, a Massachusetts Democrat, has expressed concern about introducing new tax concepts as a way to pay for direct spending programs Democrats want, instead of simpler rate increases.

“I don’t want to rule anything out but I think that it is very late in the business,” Neal told reporters Thursday. “It is the ninth inning.”

Neal added that he’s concerned about how items that don’t have public market prices, like real estate and art, might be taxed. He also spoke with Sinema to try to sell her on the corporate and individual rate hikes his committee approved.  “I made my case for the rates in term of efficiency, simplicity, and they weren’t punitive,” he said.

According to a summary obtained from Wyden’s office, taxes for nontradable assets like real estate or stakes in businesses would be calculated on an annual basis, but the taxes plus interest would be payable upon sale of the asset. The tax and interest from that asset sale could be paid over time rather than all at once. Taxes on tradable assets would be calculated as though the assets were sold at fair market value.

Wyden wants the new tax to raise hundreds of billions to help offset the cost of social spending programs, and believes the new tax would be paid by approximately 700 taxpayers. Though not officially a wealth tax, he hopes support for raising taxes on the wealthy would generate momentum for a brand-new type of levy.