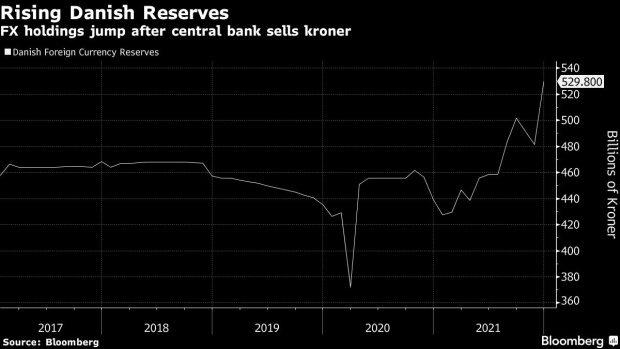 With the sale, Denmark’s foreign currency reserves jumped to 529.8 billion kroner at the end of December, the highest since 2015, the central bank in Copenhagen said in a statement on Tuesday.

The bank uses currency interventions to steer the krone in a tight band to the euro and changes its interest rates when those interventions become too great. Its benchmark deposit rate is already at minus 0.6%. Denmark has had negative rates longer than any other country.

Economists at Denmark’s largest lenders were split on whether the December interventions are a sign that a reduction in borrowing costs has moved closer.

At Nordea, Chief Analyst Jan Storup Nielsen said a rate cut could be “imminent” unless liquidity improves in the Danish money market.

“The key reason for the ongoing pressure for a stronger Danish krone is the low amount of excess liquidity,” he said.

“There’s a limit to how low interest rates can go, and we’re probably not far from that,” Bjorn Tangaa Sillemann, a senior analyst at Danske, said in a note.

Economists at Sydbank and Jyske Bank said the chance of a rate cut has increased due to the high level of December interventions, while Nykredit analysts sided with Danske’s view that rates will stay on hold for now.