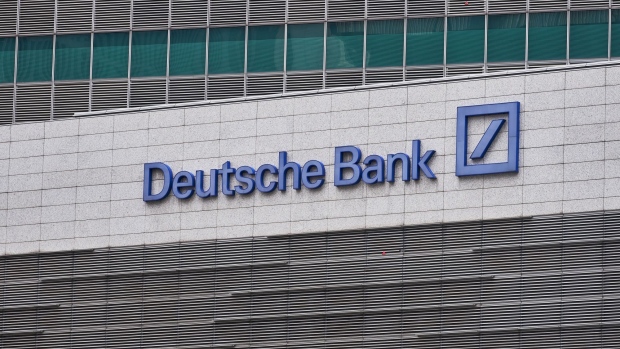 Deutsche Bank offices housed at One Raffles Quay in the central business district in Singapore on Friday, Oct. 15, 2021. Distressed debt has been one of Deutsche Bank’s biggest money makers over the years. Photographer: Lauryn Ishak/Bloomberg , Bloomberg

(Bloomberg) -- Deutsche Bank AG plans to hold an extraordinary supervisory board meeting this weekend where it will discuss candidates to succeed chairman Paul Achleitner, according to people briefed on the matter.

A decision on the successor could come as soon as the next few days, said the people, who asked not to be identified because the discussions are private.

A spokesperson for the Frankfurt-based lender declined to comment.

Deutsche Bank is under pressure from the European Central Bank to ensure a timely succession for Achleitner, whose term ends in May, and would like to agree on a candidate by the end of November, Bloomberg has reported. A formal nomination may not be announced until the spring, when the lender sends shareholders an invitation to its annual meeting.

The bank has been conducting an external search for a new chairman after two existing Deutsche Bank supervisory board members -- Deutsche Boerse AG Chief Executive Officer Theodor Weimer and Bayer AG Supervisory Board Chairman Norbert Winkeljohann -- indicated that they may not be available for the role. Achleitner had privately touted the two as potential replacements.

The new chairman would take over just a few months after Chief Executive Officer Christian Sewing is set to present a strategy update that will spell out his vision for the bank, following a four-year turnaround during which the lender exited equities trading and slashed thousands of jobs.

Achleitner took the role more than nine years ago and has overseen a steep decline in the share price under a succession of CEOs. He came under severe criticism from shareholders several years ago, when doubts about the lender’s course peaked, but a recovery over the past two years has eased pressure.