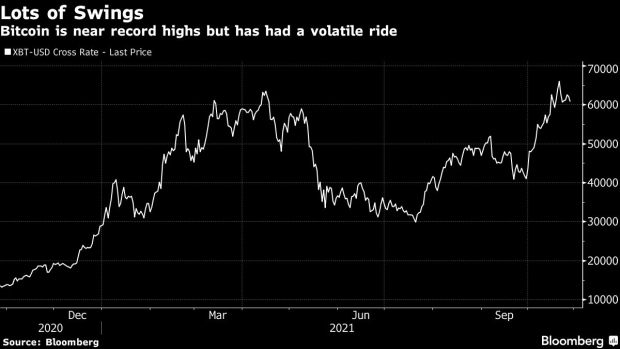 The U.S. Bitcoin-related ETF industry may hit another milestone with an offering that shorts crypto futures.

The Direxion Bitcoin Strategy Bear exchange-traded fund would offer managed short exposure to CME Bitcoin futures contracts, according to a filing with the Securities and Exchange Commission dated Tuesday. This comes after the ProShares Bitcoin Strategy ETF and Valkyrie Bitcoin Strategy ETF, both of which are backed by futures, made their debuts last week.

Bitcoin rose to a record of nearly $67,000 amid those ETF launches, though it’s fallen back since then and was trading around $61,000 in early London hours on Wednesday. The cryptocurrency has more than quadrupled in the past year, demonstrating its trademark volatility both to the upside and downside.

The Direxion fund would involve numerous risks, including the potential for short sellers to be wiped out. Bitcoin’s wild swings would be an issue as well. Other potential dangers include liquidity and issues around the futures roll, the filing said.

“If you are not prepared to accept significant and unexpected changes in the value of the Fund and the possibility that you could lose your entire investment in the Fund you should not invest in the Fund,” according to the filing.