And it was a very different world for guests required to stay six feet (two meters) apart in lines, wear masks and climb aboard rides half-empty to provide the space needed to prevent possible spread of the coronavirus.

“Staff are making an effort to keep people at a distance from each other,” said Zhu Hui, a 33-year-old housewife at the park. “You see hand sanitizers everywhere and not many people.”

The reopening is one of the largest test cases yet of whether mass gatherings can take place safely amid the virus pandemic.

As a marching band welcomed visitors to the Shanghai park on Monday, authorities around the world were facing rising pressure to end lockdowns and revive economies slammed by the global outbreak.

Disney is struggling to recoup earnings at its theme park and film businesses pummeled by the virus crisis, while China’s government is grappling with the challenges of incrementally reopening the country.

Parks, factories and restaurants in cities and countries around the world are reopening under rules to keep customers and workers apart amid the threat of second waves and flare-ups of the virus.

To reach the gates of Shanghai Disneyland, guests had to pass through body temperature checks and show that their health status has been confirmed using a smartphone app for tracking infected persons. Masks were mandatory, despite the muggy 23 degree Celsius (73 degrees Fahrenheit) weather.

Yao Yao, a 37-year-old kindergarten teacher wearing a Minnie Mouse costume, arrived at 8:30 a.m. and was among people waiting for entry.

“Simply walking in the park will make me forget anything unhappy,” said Yao, who has an annual pass.

Disney said it is limiting access to the Shanghai park on Monday to a fifth of normal capacity, below the government-mandated 30 per cent, during the initial reopening phase. Tickets for May 11 sold out in minutes, a sign consumers are prepared to spend and mingle in public as China cautiously moves beyond the virus.

New cases in the country where the pathogen first emerged have dwindled, and China has reported no deaths since April 14, according to the National Health Commission.

Visitors to the US$5.5 billion theme park had relatively short waits for rides. The Seven Dwarfs Mine Train attraction, for example, had a maximum of five minutes standing in line mid-morning, according to an app that tracks waits at the park. The longest line for a ride at the time was 20 minutes, according to the app.

In the afternoon, some lines started to stretch to 30 minutes, maximum.

On a typical spring day under normal conditions, visitors might wait more than one hour for the most popular attractions. 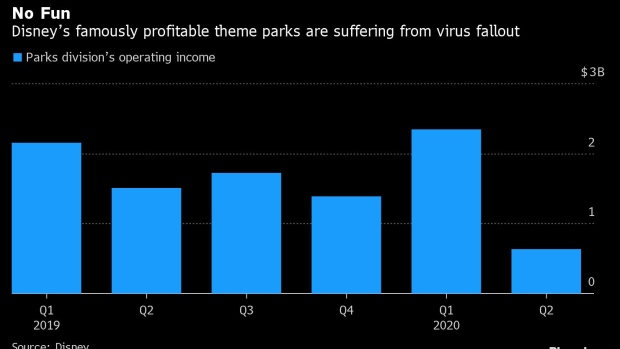 The Disney World shop, which sells toys and T-shirts, required use of hand sanitizer to enter, and had few shoppers. Popcorn and chicken wing stands were open, though fewer than on a normal day.

Live theater shows, areas where children would come into close contact, such as water play spots, and parades have been suspended during the initial reopening to avoid raising infection risks.

“The real test will come as those capacity limits are eased and the calendar moves into what is typically the critical peak summer season,” said Ron Merriman, managing director of theme park consultants MR ProFun China. “But I am very optimistic about the park’s prospects for passing that test.”

Shanghai Disneyland was the first of the entertainment giant’s parks to close on Jan. 25 as the coronavirus began to spread from the Chinese city of Wuhan, 520 miles (840 kilometers) west of the country’s business capital.

Disney blamed the pandemic for lopping US$1.4 billion off profit last quarter, largely by forcing it to shut resorts around the world. While Disney is keeping its U.S., Hong Kong and Paris parks closed, the company said last week it would open a limited number of shops and restaurants in its Disney Springs mall outside its resorts in Orlando, Florida, on May 20.

Tickets to Shanghai Disneyland during the initial reopening phase are 399 yuan (US$56) for regular days, and 499 yuan for weekends.

Disney’s theme parks division contributed about 46 per cent of operating income in the 12 months ended September 2019, more than double the earnings from its studio entertainment business, data compiled by Bloomberg show.