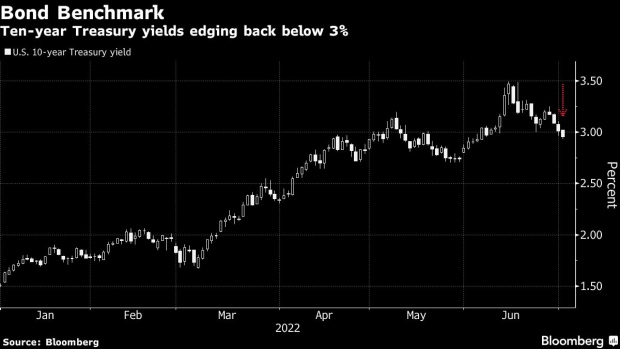 (Bloomberg) -- Global risk assets were at the epicenter of a selling spree Friday as investors kicked off the second half of the year with recession concern front and center.

Stocks and equity futures from Japan to the US tumbled, extending their historic first-half rout, while every Group-of-10 currency fell against havens, the dollar and the yen. Commodities retreated while global bonds continued their late-June rally.

Investors are dumping growth-sensitive assets as concerns mount that the Federal Reserve will hike rates to the point where the US falls into a recession and drags the world along with it. Those worries climbed a notch on Thursday after a slew of disappointing economic data as global stocks capped a dismal first half set for their worst losses since 2008.

The MSCI AC World Index has fallen 21% so far this year.

The tension was palpable in Asia trading. Taiwan’s tech-heavy benchmark looked set to enter the bear market territory and the growth-linked kiwi fell to a two-year low against the greenback. India’s rupee dropped to a record low leading the government to introduce fresh measures to halt its decline.

“Investors have fast tracked the market downside, but they can’t speed up the resolution of the structural challenges faced in the global economy,” said Gary Dugan, chief executive at the Global CIO Office in Singapore. “We also face the unwind of excesses built due to prolonged lax monetary policy making in most parts of the world.”

Sovereign debt boasted one of the few spots spared amid the carnage as investors sought havens. The yield on the global bond benchmark -- 10-year Treasuries -- slid back below 3% and Australian equivalents slumped.

“Bonds are rallying even as central bankers stay hawkish because investors are in the mindset that every rate hike gets us one step closer to a recession scenario,” said Damien McColough, head of fixed-income research at Westpac Banking Corp. in Sydney. “That can change if inflation remains persistent over time, but that’s not the central market theme at the moment.”