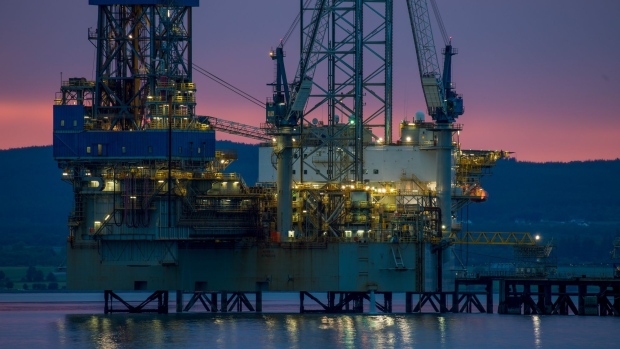 A mobile offshore drilling unit stands illuminated at night in the Port of Cromarty Firth in Cromarty, U.K., on Tuesday, June 23, 2020. Oil headed for a weekly decline -- only the second since April -- as a surge in U.S. coronavirus cases clouded the demand outlook, though the pessimism was tempered by huge cuts to Russia's seaborne crude exports. Photographer: Jason Alden/Bloomberg , Bloomberg

(Bloomberg) -- Government climate policies and the transition away from fossil fuels are not to be blamed for the energy crisis ravaging Europe and Asia, according to the International Energy Agency.

The surge in natural gas and oil prices is more a result of the economic recovery from the pandemic, which was met with a series of supply disruptions, a prolonged winter in Europe and a persistent drought in Brazil, IEA Chief Energy Economist Tim Gould said Wednesday during an Institute of International Finance event.

Investments in oil and gas production have halved since 2015 following a drop in prices, and may be slow to react to a rally as U.S. shale producers -- which have met about 70% of demand growth over the past decade -- are now focused on increasing shareholder returns, according to the economist. The world is failing to invest in energy on the scale needed to escape catastrophic climate change and avoid sharp increases in fossil fuel prices, the IEA warned in a report Wednesday.

“It can’t be taken for granted” that the supply side will react to current high prices, Gould said.