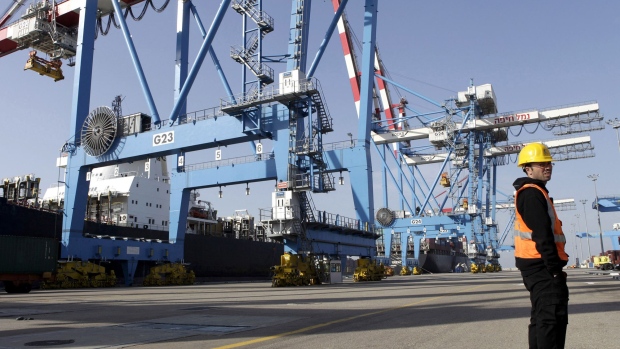 A port worker stands on the quay side near cranes at the Port of Haifa in Haifa, Israel, on Sunday, Nov. 13, 2011. Turkey bought 3 percent of all Israel's exports in the year to August, making the market worth $1.3 billion. , Photographer: Ariel Jerozolimski/Bloomberg

(Bloomberg) -- DP World, one of the world’s largest port operators, plans to make a joint bid for Israel’s Haifa Port as companies in the United Arab Emirates seek to benefit from closer cooperation between the Middle Eastern nations.

Dubai-based DP World will set up a venture with Israel Shipyards Industries Ltd. to participate in the tender for the port’s privatization, according to a statement. The plan is part of agreements signed in Dubai between DP World and DoverTower, a company owned by Shlomi Fogel, the co-owner of Israel Shipyards and Port of Eilat.

The news comes a day after the UAE and Bahrain signed landmark agreements to move toward establishing normal relations with Israel, setting in motion a potentially historic shift in Middle East politics. The biggest banks in Dubai and Abu Dhabi have already signed cooperation pacts with their Israeli counterparts.

As part of DP World’s memorandums of understanding with DoverTower:

Israel is moving forward with plans to auction off the Haifa Port, the nation’s largest seaport, with the aim of fetching as much as 2 billion shekels ($585 million), part of a wave of state-owned asset sales meant to improve services and bring in new revenues to fund an expanding deficit. The port is located in northern Israel on the Mediterranean coast.