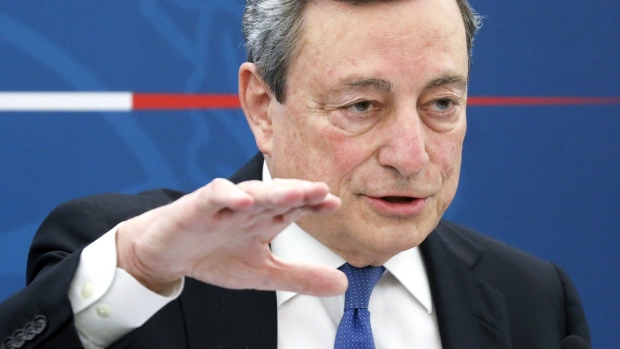 Mario Draghi, Italy's prime minister, gestures as he speaks during a news conference in Rome, Italy, on Friday, April 16, 2021. Draghi told reporters in Rome that the country will start reopening activities from April 26, as coronavirus contagions slow. , Bloomberg

(Bloomberg) -- The Italian government is planning to use public funds to reduce the impact of surging gas prices on consumers’ electricity bills, according to people familiar with the matter.

Prime Minister Mario Draghi’s administration has already spent about 1.2 billion euros ($1.4 billion) to mitigate the spike in power prices in the second quarter and is set to continue using the same mechanism, the people said, asking not to be identified discussing private conversations. That intervention cut the increase in electricity prices to 9% compared with 20% before the state stepped in.

Ecological Transition Minister Roberto Cingolani said on Monday that he expects power prices to increase by 40% in the third quarter. To finance the intervention, Italy is planning to use the revenue from the European Union’s emission trading system, which is managed by the finance ministry, people said.

Skyrocketing energy prices are plaguing European economies as they emerge from the Covid-19 pandemic and the impact is set to grow during the cold season. German electricity prices for next year, and the equivalent benchmark in France, have surged to records because gas supplies aren’t arriving fast enough to build up winter reserves and global demand is increasing.

Italy is particularly vulnerable as it is relies on imports to meet over 70% of its energy needs with almost 40% coming from natural gas, according to ecology ministry data. The country is the second-largest natural gas importer in Europe after Germany.