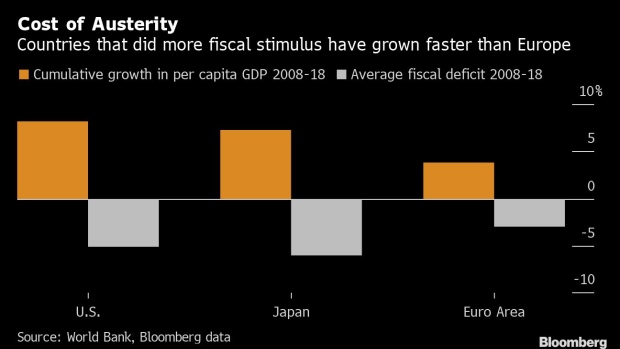 There’s a lot of brainstorming going on about central banks, and how they can work with governments to deliver a more powerful boost to economies next time a recession strikes.

The continent could use some stimulus. Its powerhouse, Germany, is stuck in the worst industrial slump for a decade. But the barriers to new ideas like helicopter money or Modern Monetary Theory –- which say monetary policy should bankroll more government spending -- are higher in Europe than almost anywhere else.

“Much of the intellectual debate around these more extreme forms of debt financing has taken place in the U.S., but the policies are actually more applicable in Europe,” analysts including Jim Reid wrote. “Now seems an opportune time for European fiscal expansion, and even for helicopter money/MMT-type policies.”

For now, even a conventional dose of government spending seems to be a stretch in Europe, with its strict budget rules. The countries that want to spend more money can’t –- and the ones that can, won’t.

The lack of fiscal support has left Mario Draghi sounding increasingly exasperated. In his final days as head of the European Central Bank, he’s been delivering a blunt message to governments: that monetary policy has run its course.

When he cut interest rates even further below zero and resumed bond purchases this month, Draghi said the ECB’s Governing Council –- which split over some of those monetary measures –- was at least unanimous about one thing: “Fiscal policy should become the main instrument.”

On Monday, Draghi told the European parliament that the ECB should be open to new economic thinking. He namechecked MMT, and a proposal for helicopter money co-written by his doctoral thesis adviser, the former Federal Reserve Vice Chair Stanley Fischer.

But he said the ECB is the wrong address. “Distributing money to one subject or the other subject, that’s typically a fiscal task,” Draghi said. “It’s the political governance of these ideas that needs to be addressed.”

When it comes to fiscal policy, Europe doesn’t have unified governance. There’s no authority that can spend and tax on the continent’s behalf.

Budgets are run by individual countries. They’re supposed to stay within limits set by the European Union, and can’t print euros to cover deficits. That’s one reason MMT, which focuses on countries in control of their currencies, has struggled to draw the kind of attention it’s enjoying in the U.S. and Japan.

EU members like Italy, whose economy has been stagnant since it joined the euro, have pushed up against the deficit limits and clashed with rule-enforcers in Brussels.

But Germany, the implicit target of calls by Draghi and his designated successor Christine Lagarde for more spending, has run budget surpluses for the past five years.

Despite a stalling economy and crumbling infrastructure, it’s shown little enthusiasm for loosening the purse strings -- even though economists see plenty of room, with yields on most German debt below zero.

“In a perfect world, she should put a lot of pressure on politicians to increase spending,” said Dirk Ehnts, a rare German economist who’s also an MMT advocate and wrote a textbook based on the new theory.

Draghi has had limited success with his own efforts, though he’s still trying.

By talking about MMT and helicopter money in front of European lawmakers, he’s “simply saying, we’ve done as much as we can on the monetary front, it’s now down to you,” said Peter Dixon, an economist at Commerzbank AG in London. “I rather suspect Draghi’s just lobbing a few trial balloons out there.”

At times, Europe has stretched its own rules –- like in 2012 when Draghi put a backstop behind government debt by promising to do “whatever it takes” to save the euro.

Some analysts say they could be stretched further, to encompass a version of helicopter money.

Quantitative easing steered trillions of euros “to financial institutions which have done very little with it,” Belgian economist Paul De Grauwe, a professor at the London School of Economics, wrote in a March article. It’s “perfectly possible” for the ECB to create money for environmental investments instead.

But when lawmakers asked Draghi about drastic action that might be taken to rescue the economy, he reminded them that the central bank can only operate within boundaries agreed by member governments.

“You change the treaty, you get what you want,” he said.

To contact the reporters on this story: Carolynn Look in Beijing at clook4@bloomberg.net;Lucy Meakin in London at lmeakin1@bloomberg.net

To contact the editors responsible for this story: Paul Gordon at pgordon6@bloomberg.net, Ben Holland, Fergal O'Brien