Cryptocurrencies are here to stay but impossible to value: David Rosenberg

The guardians of the financial sector are poised to greatly intensify their efforts to regulate the booming cryptocurrency sector.

That’s the view of the World Economic Forum’s blockchain expert, who said challenges include keeping up with the borderless nature of Bitcoin and other digital tokens, as well as ensuring that innovation isn’t stifled.

“We’re going to see another round of pretty dramatic attempts at regulating this space,” Sheila Warren, head of data, blockchain and digital assets with the World Economic Forum, said in an online Bloomberg seminar Thursday. “As there’s more and more activity in these spaces there’s more and more demand signal for regulators to get engaged and involved.”

Digital tokens are garnering ever more attention, epitomized by cryptocurrency exchange Coinbase Global Inc.’s hefty public debut on the Nasdaq, as well as Bitcoin’s ninefold rally in the past year. Crypto firms are beefing up their top ranks to shape the emerging regulatory environment and tackle lingering skepticism about digital tokens. 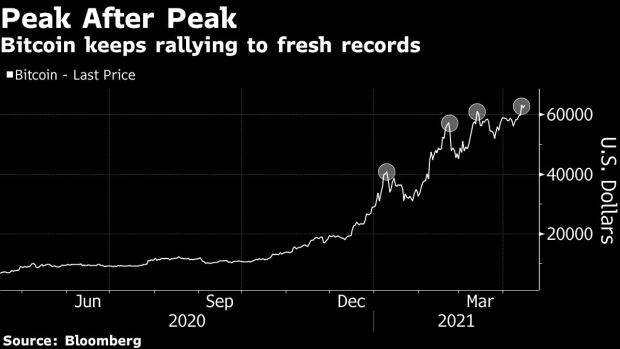 Governments are inspecting risks around the sector more closely as the investor base widens. Bitcoin’s most ardent proponents see it as a modern-day store of value and inflation hedge, while others fear a speculative bubble is building.

The euphoria surrounding Bitcoin reached a fever pitch earlier this week ahead of the highly anticipated direct listing of Coinbase, pushing the largest digital currency to a record high of almost US$65,000. The token then pulled back after the stock slid following its debut on Wednesday.

Still, Coinbase’s listing heralds the beginning of a new period of accelerating activity in the cryptocurrency industry, Warren said, adding “some are seeing this as the peak, I think that is absolutely wrong.”

There’ll be more comprehensive crypto industry coverage by sell-side analysts in the wake of the listing, Henri Arslanian, global crypto leader with PwC, said in the seminar.

Coinbase closed down 14 per cent after an earlier surge at the market open. Bitcoin was trading at about US$63,300 as of 1 p.m. in Tokyo on Thursday.