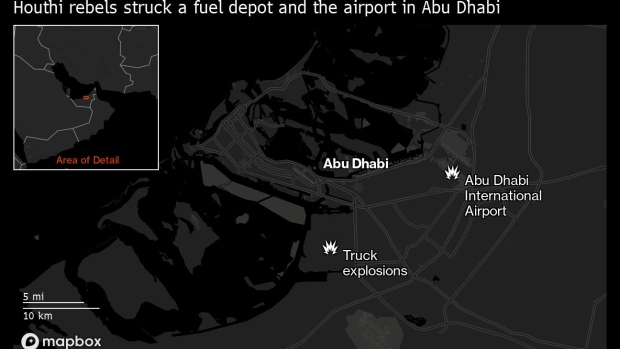 (Bloomberg) -- The drones that struck near Abu Dhabi’s airport and an oil depot this week served as a jolting reminder of an uncomfortable military reality: the ability of armed groups to target critical infrastructure using cheap, hard-to-repel weapons.

Though it’s still not clear where Monday’s attack originated from, the group’s locally assembled “suicide” drones can now fly more than 1,500 kilometers (930 miles), putting the capital of the United Arab Emirates -- and its commercial hub Dubai -- within striking distance of northern Yemen.

It’s a sobering thought for Gulf Arab powers, one that rivals in its seriousness the ongoing talks in Vienna aimed at restoring a landmark 2015 deal that eased sanctions on Iran and prevented it from developing nuclear weapons.

“It’s a big escalation,” said Adam Baron, a writer and political analyst focused on Yemen. “In contrast to Saudi Arabia, the UAE has avoided major cross-border Houthi attacks. The Houthis are likely to try to launch more and, indeed, figures within the movement have stated their intent to do so.”

Such drones have made it possible to conduct small, targeted assaults that slip through multibillion-dollar defense systems designed to deter more advanced weapons. The physical damage -- both on land and at sea -- is usually minimal but the reputational damage could still be huge for the UAE, OPEC’s third biggest oil producer, which has grown into the Middle East’s business and tourism hub by selling itself as an oasis of stability in a volatile region.

Anwar Gargash, an adviser to the UAE presidency, has played down the risks, writing on Twitter that the Houthis remained “too weak to impact the security and stability” of the country.

The perception of increased risk, however, could have repercussions for investment, even if direct strikes on critical infrastructure are rare.

Repeated attacks could disrupt flows just as crude prices surge toward $90 per barrel. The market is tightening with demand rebounding from the worst of the pandemic and some producers struggling to raise output. The UAE and Saudi Arabia are among the few oil states with significant spare capacity.

The Houthis said they attacked Abu Dhabi with four Quds 2 cruise missiles and fired a Zulfikar ballistic missile at the airport in Dubai, as well as using Samad 3 long-range drones.

UAE ambassador to Washington Yousef Al Otaiba told a webinar held by the Jewish Institute for National Security of America that the attack involved a combination of cruise missiles, ballistic missiles and drones, with several intercepted.

Three people with knowledge of the matter said that the damage was likely caused by drones, potentially fired from Yemen though the trajectory is still being investigated.

While Houthi strikes have become a weekly occurrence in Saudi Arabia, usually intercepted by air-defense systems or landing in remote areas, a 2019 drone and missile attack on a major oil facility highlighted the broader risks when it briefly took out half the kingdom’s oil output and roiled global markets.

The smaller-scale attack in the UAE didn’t affect output and the oil market’s response was muted. But as the extent of the damage was still emerging in the hours following the strikes, several OPEC delegates discussed the potential market impact, according to three people with direct knowledge of the matter. The oil cartel next meets in early February.

Heightened attacks could also threaten shipping in the Red Sea, a vital choke-point for global trade, said Bernard Haykel, a professor of Near Eastern Studies at Princeton University.

“We are moving toward a period of escalation,” said Kirsten Fontenrose, who served as senior director for Gulf affairs at the White House’s National Security Council under the Trump administration. “The rapid increases in the distance missiles and drones can fly and in the payloads they can carry make their use too attractive.”

The strike on Abu Dhabi came as momentum in Yemen’s seven-year-old war turned against the Houthis, with forces backed by the UAE and Saudi Arabia recapturing parts of energy-rich Shabwa province. Concerned about spreading Iranian influence, they intervened in Yemen’s war in 2015, after the Houthis swept through the north and took the capital, Sanaa.

Both Saudi Arabia and the UAE have sought to improve relations with Tehran in recent months, however, to reduce the threat of Houthi attacks and potential for military escalation in the region.

In Tehran, analysts close to the government downplayed the notion that the Islamic Republic ordered the attack, though many Yemen-watchers said it would be surprising for the Houthis to escalate without consultation, particularly at a critical juncture for regional diplomacy and nuclear negotiations.

Understanding the Shadow War Between Israel and Iran: QuickTake

Houthi missiles and drones are based on Iranian technology developed over decades to bolster the Islamic Republic in any confrontation with the U.S. They’ve become a weapon of choice for non-state actors seeking to inflict damage on more conventionally powerful opponents.

Israeli, U.K. and U.S. officials blamed Iranian drones in July for an attack on an oil tanker linked to an Israeli billionaire off Oman. Months later, the U.S Treasury sanctioned a network of companies and people it identified as supporting drone development programs run by the Islamic Revolutionary Guard Corps.

The latest assault appeared relatively surgical, reflecting Iranian training and tactics, yet the Houthis are technically capable of conducting the operation independently, according to Dina Esfandiary, the London-based senior adviser at International Crisis Group.

“The UAE and Saudi Arabia are vulnerable to such attacks,” she said, “despite heavy investments in air defenses.”